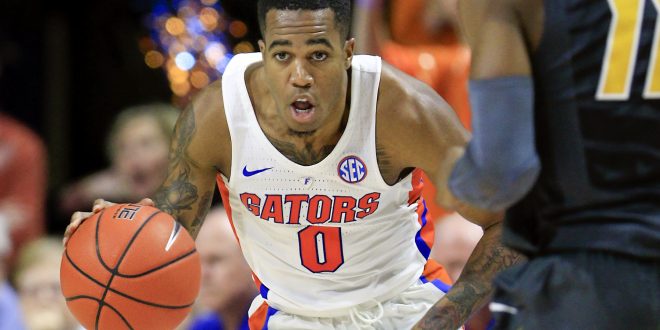 For many years, the names Kasey Hill and Chris Walker were synonymous with each other. Everyone regarded them as sure-fire prospects and each cracked the top 15 in the 2013 ESPN 100. Chris Walker was a 6-foot-10, 220-pound big man who could score from almost anywhere within 12-feet. Hill was a speedy, uber-athletic guard who could score, pass and make his teammates better around him. Many scouts and NBA pundits believed the two would be one-and-done prospects, ditching Florida for the NBA after one short season.

Fast forward to 2017, and the paths of these two “classmates” couldn’t be more different. Off the bat, Chris Walker found himself involved in multiple conduct cases, resulting in suspensions and loss of playing time. Walker ended up playing only two seasons for the Gators before declaring for the NBA. In those two years, Walker averaged a measly 3.7 points and 2.7 rebounds per game, averaging 11 minutes played per contest. The 12th-ranked recruit in the 2013 ESPN 100 declared for the NBA after his sophomore year with the Gators and would go undrafted. Walker now plays in the NBA’s D-League for the Rio Grande Valley Vipers, the affiliate of the Houston Rockets. He’s posting 4.7 points and 2.9 rebounds per game for the Valley Vipers on a team that includes NCAA studs Gary Payton II, Kyle Wiltjer, P.J. Hairston and Darius Morris.

Kasey Hill’s story involves a road less traveled. Hill is in his fourth year at the University of Florida, and has finally figured out how to play his style of basketball in the most efficient way. ESPN dubbed him the Umatilla native the 10th best recruit in its 2013 top 100. He ranked as the second-best point guard in the class. In his first three years at UF, Hill only shot above 40 percent in one season, his freshman year.

As a diaper-dandie, Hill didn’t pan out as he was supposed to, posting a mediocre stat-line of 5.5 points, 3.1 assists and 1.2 steals per game. His sophomore year, Hill’s points per game average climbed to 7.2, but his turnovers per game jumped from 1.6 to 2.2. He shot 2.8 percent worse from the floor that season and dropped 13.7 percentage points from the charity stripe. Hill’s first two seasons featured an out-of-control guard who couldn’t harness his skills to the best of his ability. The floor general saw himself more as a shooter than a playmaker, taking contested shots from mid-range and beyond the arc. His play frustrated many Florida fans who expected an offensive facilitator, instead of a stagnating cog in the machine.

Pressure was rising as Kasey had reached his junior year. The 22-year old still hadn’t posted a season averaging double-digit scoring, or more than 4.5 assist per game. The 2015-2016 season wasn’t Hill’s best, as he averaged 9.1 points per game, shooting 39.1 percent from the floor, but it was monumental in terms of what it did for his offense. Hill’s playing style changed severely during the NIT that post-season. In three games vs. North Florida, Ohio State and George Washington, Hill averaged 13.7 points, 5 assists and 3 steals per game, while shooting 40.9 percent from the floor and 44.4 percent from downtown. The junior guard, at this time and place, finally changed his playing style to that of a drive-and-disher, instead of a pull-up shooter.

What We’ve Waited For

We’re now in the 2016-2017 season, and it’s Kasey Hill’s final year at the University of Florida. Senior point guards with strong leadership and efficient play-making can be hard to find in the NCAA, but the Gators have exactly that. Hill has started to play every game this season like he did during the 2016 NIT. He’s averaging a career-high 9.9 points, 4.9 assists and 1.9 steals per game. He’s improving his career PER of 12.8 with a 15.1 grade so far this season, and has raised his FG%, 3P% and FT% from last season.

Hill’s having a season to remember, but in his last three games, he’s been an X-factor for the Gators. Hill has posted 12, 11 and a career-high 21 points respectively in his past three contests. On Saturday, Feb. 4 vs. Kentucky, Hill finished with 21 points, 6 assists, 5 rebounds and 2 steals. He shot 8-16 from the floor and 1-3 from three-point range. He’s had at least one steal in all but four games this season, and is currently riding a streak of 14 games with at least one steal.

If there’s one thing that’s necessary for college basketball fans, it’s patience. In the one-and-done era, many NCAA faithful expect high school prospects to come out fully prepared for a game, which quite frankly, plays at a much faster pace and physicality than it did even a couple of years ago. If Kasey Hill had made the same mistakes that Chris Walker had, and tried to leave before he was fully ready for the next level, the Gators could be without one of their most pivotal players. Instead, Hill put in his time in Gainesville, going from back up point guard to the bonafide leader of a squad that currently sits at No.17 in the latest AP Poll.

With eight games left in the 2016-2017 regular season, Kasey Hill still has time to improve upon his current stat total and continue to cement his place in Florida basketball history. Hill is currently fourth in all-time assists, sitting 13 dimes behind Eddie Shannon (1995-1999) and 67 behind UF’s all-time leader, Erving Walker (2008-2012). Kasey is also seventh in steals in program history and is only three short of passing Scottie Wilbekin (2010-2014).

He’s 40 rips away from passing Eddie Shannon (1995-1999) to become the Gators’ all-time steals leader, which may be a bit of a stretch considering the short amount of time left in the season. Hill’s also only 35 points away from joining Florida’s 1,000-point club. Kasey Hill wasn’t the player that many Gator fans expected when he first came to Gainesville, but he’s exactly what the team needs to make a strong post-season push in his final season at the University of Florida.