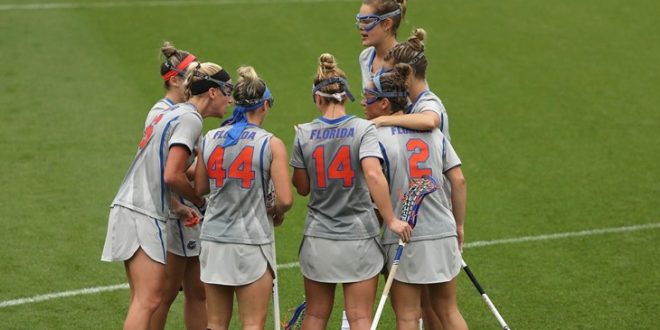 After a successful 18-2 season last year that ended in a one-goal loss in the second round of the NCAA Tournament to Penn State, the Gators lacrosse team looks to continue that success this season. They were already put to the test with an exhibition game against the U.S. National Team where they lost by only one goal. They enter the season as the third-ranked team in the country.

#FLax is back! Come out THIS SATURDAY at 12pm to see a top-3 matchup as North Carolina comes to The Diz to take on the #Gators! #GoGators pic.twitter.com/OOgOvzGWjn

Defensively, the team was solid, ranking 11th in saves percentage (.483) and 12th in scoring defense (7.5 goals allowed per game). Goalkeeper Mary-Sean Wilcox had a respectable season with an 8.2 goals against average, a .448 saves percentage and a 17-1 record. She graduated and now Haley Hicklen handles the starting goalkeeper job, according to Gators lacrosse head coach Amanda O’Leary.

One key player the Gators will be returning is Shayna Pirreca. She had a team-high 17 assists last season. She played in all 20 games last year and made 18 starts. During the 2016 season, Pirreca had several highlights including tying a career-high with four goals twice (Michigan on Feb. 13 and Penn State on May 15), posting nine multiple-goal games and six multiple-assist games, and scoring the fourth most goals on the team (31).

The team begins a daunting start to its schedule, facing six ranked teams in its first 10 games. Of the six, all but one are ranked in the top 10, including defending champions UNC. Molly Hendrick, who was the team’s leading scorer last season, is returning and that’s huge for the Tar Heels.

Offensively, the Tar Heels were among the best in the game last year, ranking fifth in scoring offense (13.6 goals per game) and 11th in assists per game (6.5). They were also a very good defensive squad, ranking ninth in saves percentage (.492) and 25th in goals allowed per game (8.3).

The season opener against North Carolina will begin this Saturday at noon in Gainesville, Florida.

Previous The Road Less Traveled, a Kasey Hill Story
Next SEC Hoops Preview: No.15 Kentucky Looking to Rebound Against LSU