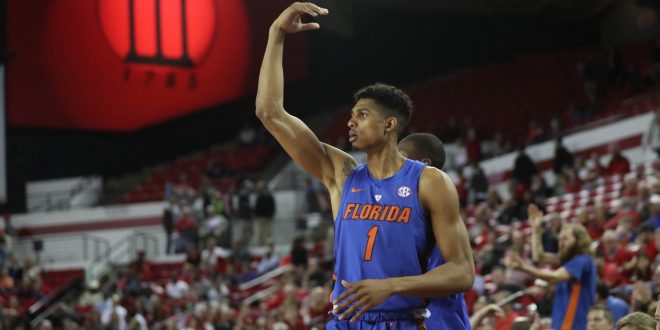 Feb 7, 2017; Athens, GA, USA; Florida Gators forward Devin Robinson (1) reacts to a play on the bench in the second half of their game against the Georgia Bulldogs at Stegeman Coliseum. The Gators won 72-60. Mandatory Credit: Jason Getz-USA TODAY Sports

The NCAA basketball committee will be revealing a Top 16 ranking for March Madness on February 11. Essentially, the projected top four seeds in each region will be ranked.

The committee is taking a page out of the College Football Playoff in how they reveal rankings towards the end of the season. It’s a way for teams to get an idea of how good their resume is leading up to conference tournaments. Not to mention, a good way for the NCAA to get more TV money.

Are the Gators in?

The Florida Gators should be in. In Joe Lunardi’s latest Bracketology, he has the Gators in as a three seed. Florida has been on a tear as of late, riding high on a five-game win streak. During the streak, they have beaten opponents by an average of 28 points.

Check out the highlights from tonight's 72-60 road win at Georgia! pic.twitter.com/33VGdgoiFH

Aside from Kentucky and South Carolina, the Gators have an easy conference schedule remaining. They showed this past Saturday that they can not only compete with, but beat the Wildcats. When the Gamecocks come to Exactech Arena, Florida will be looking to avenge a loss from earlier in the season.

How About Other SEC Teams?

Realistically, only Kentucky and Florida will be ranked in the Top 16. The Wildcats have lost three out of their last five games, including the bad loss to Florida. Yet, they hold a 19-5 record and have played in some great games against marquee teams.

Florida and Kentucky are fifth and eleventh respectively in ESPN’s basketball power index.

Looking ahead, only three SEC teams will probably make the Big Dance. Unless Alabama closes out the season strong and goes deep into the SEC Tournament, they won’t be in. They got off to a good start Tuesday night however, after beating South Carolina in 4OT, 90-86.

The NCAA March Madness Bracket Preview will air on CBS starting at 12:30. Unlike the College Football Playoff, the unveiling of rankings will be a one-time showing rather than a reoccurring show every week.