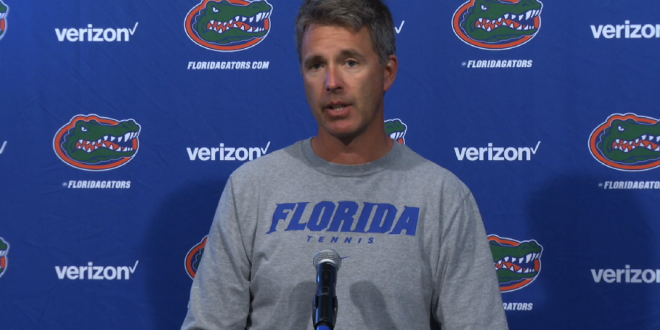 The Florida Gator Women’s Tennis team is ranked No. 1 and will hold the top seed for the ITA National Women’s Team Indoor Championship.

The tournament is held over four days in New Haven, Connecticut.  Fifteen top teams qualified for the event by winning their respective 2017 ITA Kick-Off Weekend four-team regionals.  Yale received an automatic bid as the host site.  Each team is guaranteed three matches in the single-elimination tournament.  This is the 30th annual ITA Division I National Women’s Team Indoor Championship, but recent reports suggested the ITA (Intercollegiate Tennis Association) might cancel the indoor championships.  Gators head coach Roland Thornqvist says this was part of the reason he wanted his team to compete this year.

The Gators are coming off of a strong weekend of competition after defeating No. 3 Pepperdine 5-2 on the road.  The win last weekend gave Thornqvist his 450th win as the Florida head coach.  However, Thornqvist’s focus was on his team.  He says the hard-fought matches showed him the depth of his roster.

This will be the Gator’s 17th appearance in the National Indoor Championship, but only the second in the last six years.  Florida has won this title six times, the last being the 1998-1999 season.  The last time the Gators played in the NIC, they finished in the semifinals in 2014-2015.  Thornqvist says this team will adapt to indoor play even better than championship teams in the past.

The Gators begin their first round of matches against Michigan at 3:30 on Friday.