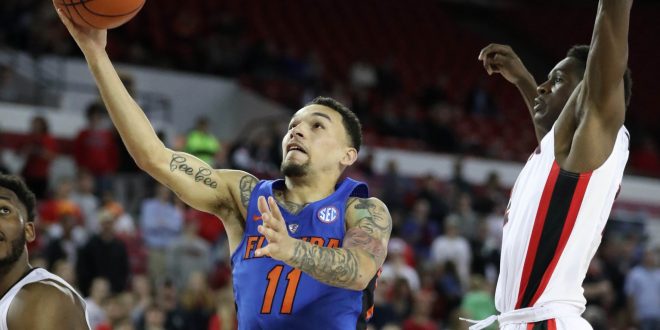 No. 17 Florida Must Get Physical Against Texas A&M on Saturday

The Florida Gators are on their second, five-game win streak of the SEC schedule and continue to ride the momentum they’ve garnered in recent weeks. On Saturday afternoon, the Gators take on the Texas A&M Aggies, who are a far different team than last season. TAMU lost three out of their top four scorers last year to graduation including Danuel House Jr., Jalen Jones and Alex Caruso. The Gators have only played the Aggies nine times in program history, leading the series 5-4. Before Texas A&M joined the SEC, the two teams had only met twice, both times coming in 1992.

Last season, the 1-3 positions were what hurt UF when they took on TAMU. This year, it’s the Aggies physicality and size that help them win games. Four out of Texas A&M’s top-five scorers are 6’9″ or taller. The list includes studly sophomore Tyler Davis , a key component of the team’s success last season, fellow sophomore D.J. Hogg, diaper-dandie Robert Williams and Colombian junior Tonny Trocha-Morelos. TAMU’s pure size has elevated them to t-51st in the nation in rebounding (38.6 RPG) and 13th in the NCAA in blocks per game (5.7 BPG). It’s also helped them stay grounded on defense, where they rank 87th in the country (68.6 points allowed per game). Florida Head Coach Mike White discussed TAMU’s physicality and size at length.

Davis the Aggies’ most volatile scorer, averaging 13.8 points, 7.2 rebounds and one block per game. The 6’10” second-year forward has four double-doubles this season and has scored at least 16 points on 10 different occasions. D.J. Hogg is TAMU’s other star-studded sophomore, averaging 12.2 points and 5.1 rebounds per game. He’s struggled lately, scoring only 21 total points in his past three contests after returning from injury. Despite shooting 40.3 percent from the floor this season, he’s only knocked down 37.2 percent of his attempts during the SEC season.

Tonny Trocha-Morelos plays center for the Aggies and had a career-high 16 points in the team’s most recent win against SEC cellar-dweller Missouri. Next up on the big-man scoring list is Robert Williams, the freshman from Vivian, Lousiana, a town of only 3,600. Williams was the 50th ranked player in the 2016 ESPN100. Like Davis, he’s averaging close to a double, posting 11.3 points and 7.2 rebounds per game. He’s scored at least 15 points in four of his past six contests, notching 18 in three of them. Williams’ only area of struggle is the charity stripe, where he shoots a mediocre 58.8 percent clip.

Texas A&M doesn’t exactly shoot you to death but they are efficient when they do. The Aggies rank 23rd in the nation in assists per game, recording an average of 16.8 dimes per contest. Leading the passing attack is Admon Gilder, the Aggies’ only top-five scorer under 6’9″. Gidler averages 13.7 points and four assists per game. He’s scored at least 20 points in four of the Aggies’ last six games, notching 27 assists in the same span.

Florida has continued their SEC dominance, winning their fifth straight game on Tuesday evening versus the Georgia Bulldogs. KeVaughn Allen tweaked his back during that game, but Mike White said that he should be good to go on Saturday afternoon.

Sticking with the backcourt, both Chris Chiozza and Kasey Hill continue to rattle defenders, as the pair combined for 27 points, seven assists, six rebounds and six steals against the Bulldogs. Coach White summarized where Chiozza has improved his play and the offensive opportunities that Kasey Hill has been getting recently.

In KenPom’s most recent evaluation, the Gators currently rank sixth in the nation in overall efficiency. Florida ranks 2oth in offensive efficiency, while on defense, they excel even more, coming in at fifth in the nation. Joe Lundardi’s latest Bracketology has UF as a No. 4 seed, taking on Belmont in Orlando. The Gators have already played the Bruins this year, winning that game in Tampa, 78-61.

Saturday’s game tips off at noon in Gainesville and can be seen on ESPN2 with Tom Hart and Kara Lawson on the call. As always, you can listen to the game on the Gator IMG Sports Network, with Mick Hubert and Mark Wise on the call.