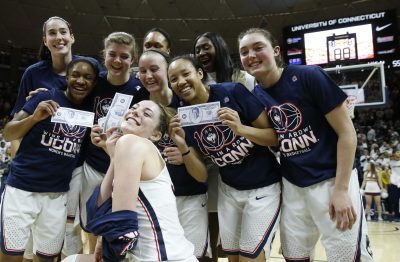 The team that has done it all proved last night that there’s still plenty left for them in the record books. The UConn women’s basketball team reached their 100th consectuive win last night when they beat No.6 South Carolina 66-55.

It has been 818 days since UConn last lost a game and several of girls on the team don’t know what a loss feels like. Most of the team’s wins come from beating their opponents by double digits and an average of 38.7 points. Only two of the last 100 games come from less than double-digit victories.

This team may not have been considered an underdog at the beginning of the season, but the Huskies did not start the season ranked No. 1. This pre-season ranking could be a result of losing a few of their star players to the WNBA including the top three draft picks Breanna Stewart, Moriah Jefferson, and Morgan Tuck. However, the Huskies’ team effort and the ability of different players to show up each night is something that has helped the team in making history this year.

The Gamecocks gave the Huskies a battle and held on to a close game throughout the first half.  Junior Forward A’Ja Wilson led South Carolina offensively with 17 points and contributed three blocks on the defensive end and Senior Center Alaina Coates contributed with a double-double performance Monday night.

For the Huskies, leading scorer Katie Lou Samuelson did not have one of her better nights. She struggled offensively and didn’t make a basket until there were just under seven minutes left to play in the third quarter. The talent on the Huskies’ team was shown evident when Junior Forward Gabby Williams stepped up to lead the team finishing the game with 26 points and 14 rebounds.

This win is the sixth victory for the Huskies just this season against a team currently ranking in the top eight.

100!! A career-high 26 points from Gabby Williams helps No. 1 UConn to its 100th-straight win on Monday against No. 6 South Carolina! pic.twitter.com/00ITk0LHYD

UConn’s remaining regular-season schedule includes traveling to Tulane this Saturday and returning home to play Memphis and Temple next week.

The team hasn’t lost a game since January 2014 but head coach Geno Auriemma wants the girls to continue working to win the championship for themselves as the team looks to continue their streak in the remainder of the season.