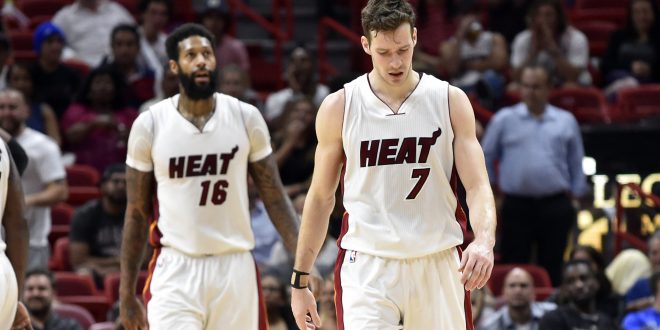 On Saturday, the Heat’s 13-game win streak came to an end after a tough loss in Philadelphia to the 76ers. But last night they had a chance to keep their eight-game home win streak alive against their in-state counterparts in the Orlando Magic. Miami failed to defend their court and suffered a loss to a struggling Orlando team.

Prior to last night, the Magic sustained a four-game losing streak, tied for their worst of the season. Despite the Heat overall having a better season, they’re having a difficult time figuring the Magic out. Orlando leads the season series two games to one.

Orlando head coach Frank Vogel said the team’s effort and focus won them the night. The Magic took control of the game from the tip as they started the game on a 10-2 run. But the Heat were resilient, and they battled their way back. This was the story line of the game. From one momentum game swing to another, this game came down to the wire.

Orlando’s guard play picked apart the Heat defensive front. Magic guard Evan Fournier was key to his victory last night. He was on the floor for 34 minutes and lead the way for his team with 24 points, and added 4 boards to his tally. Guard Elfrid Payton came off the bench and contributed valuable minutes to combo with Fournier. Payton had 20 points, 5 rebounds and 4 assists. Additionally, guard Mario Hezjona and Jeff Green combined for 24 points off the bench to give their team a spark.

While the backcourt played particularly well last night, the Orlando front court offered strong effort against one of the best big men in the league. Heat center Hassan Whiteside is one of the NBA’s most fierce rebounders and shot erasers. But his team lost the rebound battle 52 to 37.

Whiteside did a decent job containing his counterpart. But despite Magic center Nikola Vucevic going 4 for 14 from the floor, he was instrumental in his team getting the ball. Vucevic grabbed 17 boards and his front courtmate, Serge Ibaka picked up the slack in the scoring column. Ibaka went 7 for 9 on shooting, with 17 points and added 8 rebounds.

Miami sorely missed guard Dion Waiters in their past couple outings. After missing the last few games due to injury, Waiters’ scoring power returned to the lineup against the Magic last night and he made his presence felt. Waiters had 23 points and 6 assists. Backcourt mate Goran Dragic didn’t have the best night, as he went 6 for 15 from the field. But he made up for it by going 10 for 10 at the line, and ended the night with 22 points.

While the Heat weren’t lacking in offensive firepower, Dragic said his team was lacking on the other end of the floor. Some drama brewed when Whiteside was benched three minutes into the game after missing a rebound.

This loss from Miami is troubling as it demonstrates their inconsistency. The team has toppled the likes of Golden State and Houston, but fall short to Orlando. The Magic’s season is all but over. Hopefully the Heat organization can decide whether or not they are playing to win right now, or they’re playing for the future. Their recent win streak decreased their chances for a lottery pick, but still isn’t enough to put them in serious playoff contention. If they don’t choose a direction soon, the team will not be in a good spot now or down the line.

Previous No. 15 Florida Looks to Extend Win Streak To Seven vs. Auburn
Next Huskies Making History