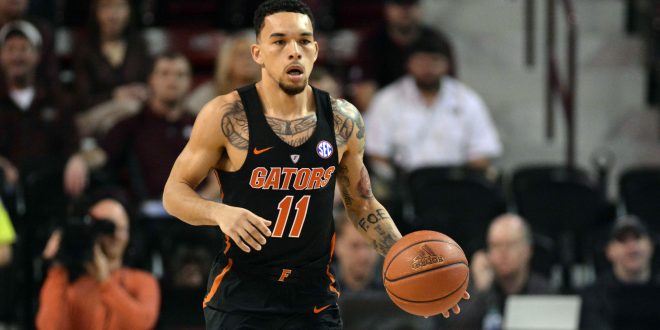 No. 15 Florida Narrowly Avoids Defeat In 57-52 Victory over Mississippi State

It wasn’t pretty, but the Gators did just enough to pull off their eighth victory in a row. Florida went to Starkville on Saturday on took down to the Mississippi State Bulldogs, 57-52, as Chris Chiozza led the team with 14 points on 6-of-8 shooting.

The Bulldogs were the third best three-point shooting team in the SEC coming into the game but went a putrid 2-of-23 from beyond the arc on Saturday afternoon. MSU was also a terrible 6-of-13 from the charity stripe. Quinndary Weatherspoon led Mississippi State with 17 points but did it by going 8-of-20 from the floor.

KeVaughn Allen was electric scoring 11 points in the first half but failed to notch a single point in the final twenty minutes. Kevarrius Hayes did what he needed to in Florida’s first game since John Egbunu’s ACL injury, scoring nine points, grabbing 10 rebounds and swatting four shots.

Kasey Hill had nine points, propelling him into the 1,000 point club for Florida, but committed six of Florida’s 16 turnovers. Hill’s one assist also tied him for second on Florida’s all-time assist list with Ronnie Montgomery. In another anomaly, Devin Robinson went 0-of-6 from the floor, scoring zero points, but had 10 boards.

If Mississippi State’s inability to win the game was due to their poor free throw and three-point shooting, Florida’s failure to protect the ball is what kept the contest close. The Gators had 16 giveaways on Saturday afternoon leading to 17 points for the Bulldogs. UF outrebounded MSU, 42-38, but were outscored badly in the paint, 52 to 36. Mississippi State also failed to score once in the final 2:24 of the game.

Mississippi State started the game on a 5-0 run in the first three minutes. The stretch consisted of the Gators going 0-of-3 from the floor with two turnovers.

The Bulldogs scored eight of their first nine points in the paint, taking advantage of John Egbunu’s injury. Mississippi State led by five points after just under seven minutes of play, despite going 1-of-7 from beyond the arc.

Florida took their first lead off the game on a contested KeVaughn Allen jumper with 9:15 left in the first frame. Allen had seven of the Gators’ first 14 points, starting off 3-of-5 from the field. Florida’s lead came off of a 7-0 run.

With 4:13, giveaways continued to keep the game close. Florida’s eight turnovers led to eight points for the Bulldogs. Still, the Gators led by three with just over four minutes left thanks to KeVaughn Allen’s eleven first half points.

UF closed the first half on a 25-11 run, going into halftime with an eight-point lead. The Bulldogs only hit one shot in the final three minutes of the first frame, coming off of an Aric Holman put-back with only one second left in the first frame.

The Bulldogs took nine more shots in the first half than the Gators but shot only 33 percent from the field. The Gators shot 46 percent overall. MSU outscored UF in the paint, 18-8, in the first frame, but were outscored in bench points, 12-9. Devin Robinson had zero points in the first twenty minutes but grabbed seven rebounds.

Chris Chiozza continued to stay hot as he had 14 points at the under-16 minute timeout. The Gators led 39-31 at that point in the game. Florida started the second half 3-of-8 from the floor, while Mississippi State was 3-of-6.

With 13 minutes left in the game, Florida took their largest lead of the game up to that point on a Kasey Hill, free-throw line mid-range jumper. The Gators led by 12 then.

The Bulldogs pulled within eight with 9:27 left in the contest. Quinndary Weatherspoon dropped 17 points in the first 30 and a half minutes of the game but did it on 16 shots.

Aric Holman tied up the game at 52 with under two and a half minutes left in the contest. A 19-9 run by Mississippi State fueled the run off of countless Gator turnovers.

While the Bulldogs made it close at the end, Florida hit enough of their free throws to close out the game strong and take down Mississippi State, 57-52. The Gators take on South Carolina at home on Tuesday night at 7 p.m. Canyon Barry looked to have hurt his ankle at the end of the game, but according to the team, appears to be okay moving forward.

Canyon told Coach White he was OK and ready to go back in. Will monitor that. #Gators

Previous No. 15 Florida Looking For First 8-Game Winning Streak of the Season vs. Mississippi State
Next Gator Baseball Looks Strong In 8-1 victory