The Florida women’s basketball team will take on the Kentucky Wildcats in Lexington on Sunday. The Gators are 12th in the conference (4-9, 13-13 overall) and they are coming off a loss at home against the Missouri Tigers 74-67, which ended their two game win streak.

Kentucky is ranked fourth in the conference (9-4, 18-8 overall). The Wildcats are also coming off of a win in Fayetteville over the Arkansas Razorbacks with a final score of 69-62.

For the Wildcats senior guard Makayla Epps lead her team in points this season with an average of 17.0 points per game. She also adds four rebounds a contest. Post player Evelyn Akhator is another big contributor averaging a double-double with 14.7 points and 10.5 rebounds per game. Guard Taylor Murray is another one to look out for as she comes off a 16 point game against Arkansas.  She averages 12.5 points and 5.3 rebounds per game. Sophomore guard Maci Morris averages 11.7 points per game and is a threat from the three point line.

Kentucky leads the series against the Gators 28-25. The Gators and Wildcats last meeting was in the SEC Tournament during the quarterfinals where Florida fell 92-68 last season. However, the Gators did get the win in their last regular season match up, where the final score was 85-79.

For the Gators Ronni Williams looks to remain hot in scoring, as she leads the Gators with 18.8 points per game. She also leads the Gators in rebounding (7.9 pg) and free throw percentage (73.6%). Over the last two games Williams has averaged 18 points and nine rebounds.

Florida has two other players who average in the double figures.

Forward Haley Lorenzen is second on Florida’s roster in scoring with 12.5 points per game. Another Gator to look for is Delicia Washington who has averages 14.0 points per game.

As a team, The Gators have forced 19.0 turnovers per game and they shoot 44.9 percent from the field but only 27.5 percent from long distance.

The Gators only have three more regular season games left until the SEC Tournament. The Florida Gators will take on the Kentucky Wildcats at 1 PM in Lexington and the game will be televised on SEC Network and will also be aired on ESPN Gainesville 98.1 FM. 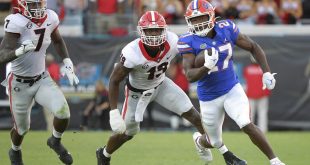 In a weekend that saw nine Top-25 teams lose, the SEC was not exempt from …