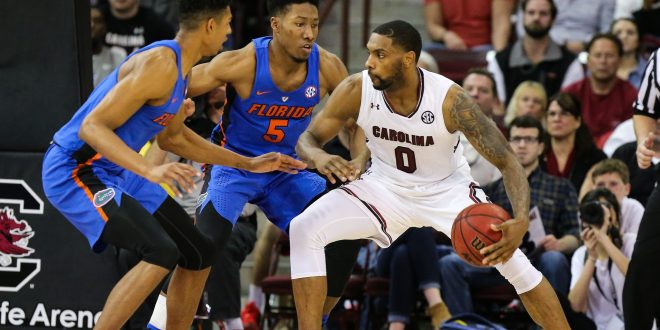 The thought of the first South Carolina-Florida game this season puts a sour taste in a lot of Gator fans mouths. UF was awful from the three-point line and on offense in general and lost a 57-53 “thriller” in Columbia. Tuesday night’s match-up features two of the most efficient defensive teams in the nation and is sure to be a low-scoring game once again. The match-up will be a chance for Florida to solidify themselves as a #3 seed in the upcoming NCAA Tournament and put themselves on top of the SEC. For South Carolina, it’s their last chance to get a marquee win before the regular season ends. After the Gators, the Gamecocks face mediocre to slightly above mediocre Tennessee, Mississippi State and Ole Miss teams. At his press conference on Monday, Mike White gave a brief summary of South Carolina coming into the game.

Last time the two teams met, it took almost six minutes for the first basket to be scored. A Kasey Hill lay-up started the scoring at the 14:14 mark of the first half. With ten minutes played, the game was only at 9-8 in South Carolina’s favor. On top of the Gators’ stagnant offense, Florida went a putrid 0-17 from three-point range and shot 53.6% from the free throw line on 28 attempts. Many Gator players had some of their worst shooting performances of the season, as Canyon Barry went 4-13 from the field, while Devin Robinson only made four of his 11 shots. Justin Leon scored 0 points, while KeVaughn Allen notched one point. Chris Chiozza and Kasey Hill combined for eight turnovers, while the team committed 16 turnovers and 27 fouls. SCAR did have a high foul total themselves, recording 28, but the Gamecocks shot 14% better from the charity stripe. If Florida wants to win this game, they’ll have to do so by controlling the tempo and getting points on the board early. Florida Head Coach Mike White discussed a change in defense for Tuesday night and how his team can commit less turnovers.

South Carolina has lost three of their past four games, with two of those defeats coming at home. The Gamecocks are shooting 45.1% in their last three games overall and an even worse 28.3% from beyond the arc. Even when SCAR gets to the foul line, their hit rate has been below average. In that three game span, the Gamecocks are only hitting 64.7% of their shots from the free throw line.

While South Carolina overall has been trending downward, Sindarius Thornwell continues to make his case as to why he should be SEC Player of the Year and a top choice in the upcoming NBA Draft. Thornwell is averaging 25.3 points and only one turnover per game in his last three contests. Thornwell is second in the SEC in points per game, averaging 20.2, while also leading the conference in steals per game, at 2.1 takeaways per contest. For Florida, it won’t be a matter of shutting down Thornwell, who scored 20 points the last time the two teams met, but limiting him to as few attempts as possible.

While Thornwell is a beast in himself to stop, Chris Silva might be the Gators’ biggest worry come Tuesday night. The 6’9″, 223-pound sophomore from Gabon is third in the SEC in field goal percentage, knocking down 56.9% of his shots. The Gamecocks roster features five players that are either 6’9″ or taller, but Silva is the most menacing in terms of two-way play. He’s averaging 10.1 points, 5.9 rebounds and 1.4 blocks per game. Silva has had 15, 16 and 14 points respectively in his last three games, shooting higher than 66.7% in each of those contests. Silva’s main issue is foul trouble, as he’s fouled out of four of the past five games he’s played in. Florida contained him to 3-8 shooting last time the two teams met, but that was with John Egbunu.

In Florida’s first game without John Egbunu, they were outscored in the paint, 36-22. 69.2% of Mississippi State’s points came in the interior. On the brightside, the Gators did outrebound the Bulldogs, 42-38, and 31-26 on the defensive glass. Kevarrius Hayes did exactly what he needed to in the team’s first game since Egbunu’s ACL injury. He dropped 9 points, 10 rebounds and swatted 4 shots in the victory over Auburn. Despite scoring 0 points, Devin Robinson stepped up big time on the glass, grabbing 10 rebounds. Schuyler Rimmer and Keith Stone, the Gators’ next men up with Gorjok Gak out due to injury, were non-factors in the game. The two combined for 0 points, 0 blocks, 0 assists, 1 turnover, 3 rebounds and 3 fouls. Florida will desperately need more production from these two on Tuesday night. While Keith Stone is dealing with vertigo, Rimmer has absolutely no reason to not contribute more, and will absolutely have to vs. South Carolina. Mike White discussed Hayes’ impact on Saturday night’s game on Monday afternoon. Kevarrius also talked about what it was like to replace Egbunu, and how difficult it truly was.

Potential NCAA Tournament seeding implications are on the line for both teams. Florida remained a #3 seed in Joe Lunardi’s latest Bracketology released Monday afternoon, with the same match-up they had the week before vs. Bucknell in Orlando. South Carolina remained a #7 seed, but would now take on Michigan State in Sacramento. Florida moved up to #13 in the latest AP Poll, while South Carolina dropped out of the rankings for the first time since January 9th. The SEC still has four teams in the big dance, per the latest Bracketology, with Tennessee in the first four out.

Keith Stone will more than likely be able to play, but is still struggling with balance and confident issues due to vertigo. Canyon Barry is a game-time decision with a sprained ankle. Mike White gave an update on Barry’s injury on Monday.

Tuesday night’s game tips off at 7 p.m. from Exactech Arena and can be seen on ESPN with Joe Tessitore, Sean Farnham and Kaylee Hartung on the call. You can listen to the game as always on the Gator IMG Sports Network with Mick Hubert and Bill Koss. Tuesday’s game is already sold out and is one of the last two home games remaining on the Gators’ schedule.