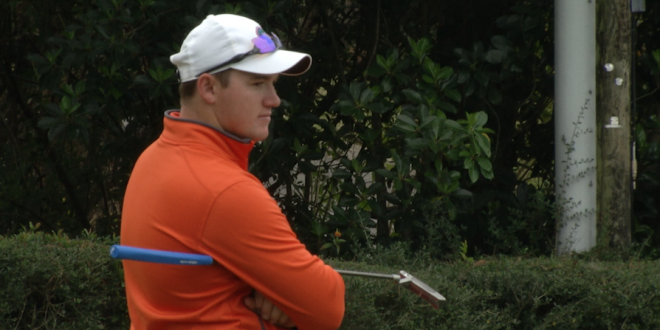 Sophomore Sam Horsefield looks at his putt during the first round on the par-4 9th hole during the Gators SunTrust Invitational. Credit: Amanda Rose

The University of Florida men’s golf team finished fourth at the SunTrust Gators Invitational, which included four Gators finishing in the top 10 top individually.  The team finished the 54-hole tournament at +13 (853).

The Gators hosted the 15-team field Saturday and Sunday at the Mark Bostic Golf Course at the University of Florida.

The Gators boasted several individuals filling up the top 10.  Junior Alejandro Tosti and freshman Andy Zhang signed for -4 (66) in their third round, moving both golfers to a tie for sixth.  Finishing one shot off was sophomore Sam Horsefield who carded a 1-over 71 Sunday.  Rounding out the top -10 was senior A.J. Crouch, competing as an individual, also carded a 71 to finish the tournament on three-over.

Sophomore Jorge Garcia started the day at even par in third place.  He struggled all day, unable to make any birdies.  Garcia finished the day with a 5-over 75, ending the day in a tie for 16th.

Ryan Orr, Ryan Celano and Gordon Neale also competed for the Gators.  All three struggled this weekend, with Celano and Orr finishing in a tie for 39th, one shot ahead of Neale.

The Gators will have the next two weeks off before heading to Las Vegas for the Southern Highlands Collegiate Invitational on March 6-8.