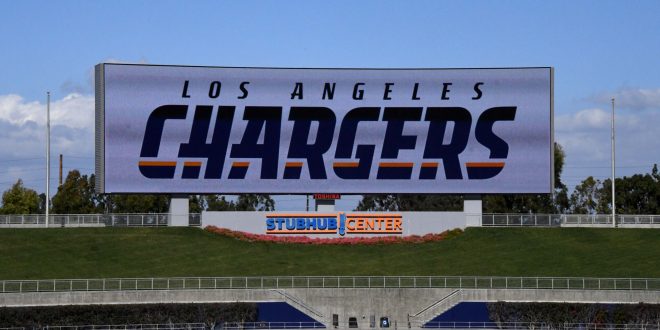 Feb 22, 2017; Carson, CA, USA; General overall view of Los Angeles Chargers logo on the scoreboard at the StubHub Center. The venue will serve as the home of the Chargers for 2017 and 2018 seasons as part of owner Dean Spanos (not pictured) relocation of the franchise from San Diego. Mandatory Credit: Kirby Lee-USA TODAY Sports

Las Angeles quarterback Philip Rivers is slowly becoming acclimated to life in the big city. After 13 seasons in San Diego, the star said he will always be a San Diego Charger at heart.

Career While in San Diego

Rivers could not have seen the move coming when he signed his contract through 2019. The franchise was in San Diego for 55 years and it was his first home. In the 2004 Draft, Rivers was chosen as the fourth pick in the first round by the New York Giants out of North Carolina State. He was subsequently traded for Eli Manning to the Chargers. Since then, he has been one of the most consistent quarterbacks in the game.

Rivers just competed in is his sixth career Pro Bowl where he joined two other Charger teammates, Casey Hayward and Melvin Gordon. Rivers will going into his 14th season as an accomplished quarterback.

In addition to the above, Rivers heads into 2016 as the franchise’s all-time leader in multiple areas:

Despite all of his accomplishments, Rivers said that the one thing he wishes he could have done was bring the city a Super Bowl championship.

Rivers said that leaving the city that he began his career in is tough, however, he is looking forward to being in LA and is appreciative of the fans. He also added that he has received many positive comments since the move was announced. Rivers said the reality of the move is slowly setting in for him as he begins to get excited about the upcoming season.

The team plans to release their official 2017 schedule this Spring. The Chargers do know that the opponents they will face at home include: the Buffalo Bills, Denver Broncos, Cleveland Browns, Kansas City Chiefs, Miami Dolphins, Philadelphia Eagles, Oakland Raiders and Washington Redskins.