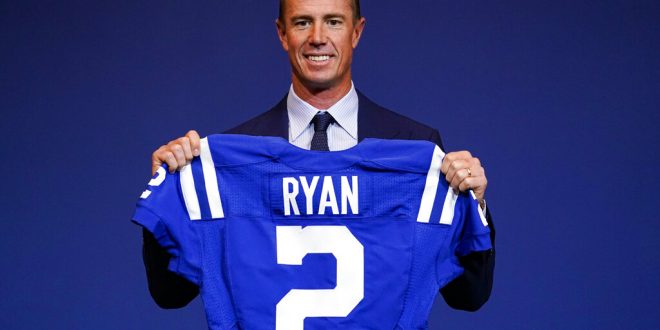 Matt Ryan spent 14 years in the NFC with the Atlanta Falcons. He was a four-time bowler, Rookie of the Year and MVP while taking the Falcons to the Super Bowl in 2016.

For the first time in his career, he will play for a different team and will suit up for the Indianapolis Colts. Ryan said this is the exact spot he wants to be.

Ryan will follow some great quarterbacks in Colt’s history Jonny Unitas, Bert Jones, Peyton Manning and Andrew Luck. Ryan said it is an honor to follow as one of the next great quarterbacks. He still has two years left on his contract and has a base salary of $17.2 million this season.

It is not uncommon for the Colts to go through the route of signing a veteran quarterback. Phillip Rivers played briefly for the Colts before retiring in 2020. Ryan will take over for a team that went 9-8 in 2021 but missed out on the playoffs. They have been in the postseason only one other time since their run to the AFC Championship Game in 2014.

However, Ryan will instantly work with one of the top running backs in league with Jonathan Taylor. The 23-year-old from Wisconsin is coming off his best season in the NFL. He accumulated 1,811 rushing yards and scored 18 touchdowns. Taylor also caught 40 passes for 206 yards and two receiving touchdowns.

The Colts also have a strong receiving core led by Michael Pittman Jr. and a solid offensive line behind Matt Pryor, Quenton Nelson and Ryan Kelly. Ryan should also benefit from a stronger defense as Indianapolis ranked No. 16 in the league in yards allowed per game, while Atlanta ranked No. 26.