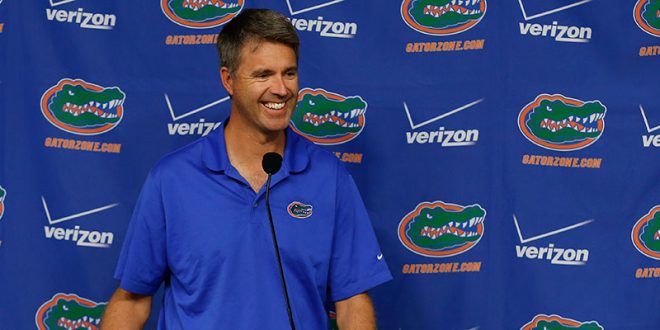 The Florida gators women’s tennis team is now undefeated at 9-0. With their recent 4-1 victory against fifth-ranked Stanford behind them, they now look to SEC conference play.

Head coach Roland Thornqvist believes in one thing to make the team better: giving them rest.

Roland Thornqvist held a press conference on Monday to discuss the team’s performance.

Coming off a victory against then-No. 5 Stanford, Thornqvist said he would allow his players to take some time off to rest up. He says that he trusts the team to take care of business and do what they need to do to become world-class players.

Thornqvist also talked about what one of his personal goals is: to gain more knowledge on what it takes for each individual to be the best player possible.

He looks to accomplish his goal by traveling around the many professional circuits and picking up the tools of the trade. He wants to learn what new methods are being used, as well as learn how people are training and working to be the best they can be.

This, coupled with giving players rest before conference play begins, is what he believes will be the winning formula to making sure the team continues undefeated and become SEC Champions.

Thornqvist also believes that one of the contributing factors to the Gators taking the No. 1 rank is the level of maturity the team is showing this season.

He acknowledges standout Ingrid Reed, who has won SEC Freshman of the Week three consecutive weeks, as slowly becoming “one of the key players for the team.”

He says in the press conference that he’s impressed with how the team is handling the emotions of winning the ITA Indoor Championship and defeating the defending champions in Oklahoma State.

Bringing this baby back to Gainesville! #hardware #ITAIndoors #GoGators pic.twitter.com/kQpm3o7KTl

Thornqvist is looking ahead to the toughest part of their season: SEC conference play. He is helping his players be the best they can be, especially against the difficult SEC conference. Conference play begins on Friday, March 5th on the road at LSU.

He’s fully aware of just how hostile the opposing SEC fans can be to a conference rival on the road. He’s also aware of the nearly non-existent room for error against other SEC teams. With the team holding a 9-0 record, the room for error decreases significantly, especially with that target on your back. That target also increases with the team being only one of three unbeaten teams in the top 64.

Secondly, he knows that the SEC, especially this year, is tough and extremely talented. In that conference, the team begins with four conference games, including LSU and Texas A&M to start.

The SEC portion is sure to be what tests the team’s mentality and ability, as well as Thornqvist’s unique coaching abilities, as they progress through the season.

The Gators women’s tennis team returns to action on March 5th when they travel to Baton Rouge for the first game of their SEC conference play portion of the schedule against LSU.

The team is hoping that it can continue its undefeated streak and go 10-0 while maintaining their No. 1 ranking in the ITA Division I rankings.