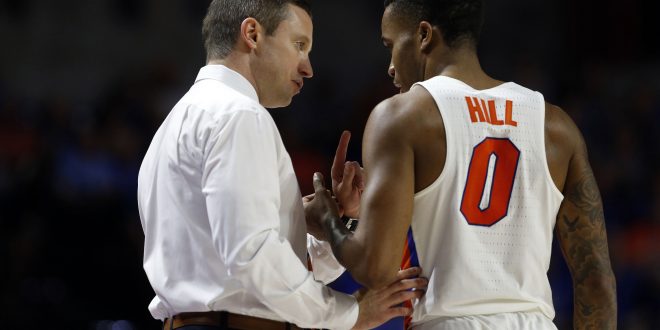 No. 12 Florida End Home Schedule with a 78-65 Win Over Arkansas on Senior Night

On Senior Night at the O’Connell Center, it was a combination of seniors in Canyon Barry and Kasey Hill, and underclassmen in KeVaughn Allen and Chris Chiozza, who got it done for the Gators. Florida took down Arkansas, 78-65, on Wednesday night, closing out their home schedule with a 9-1 record at the newly renovated Exactech Arena.

Canyon Barry led the team with 14 points on 5-11 shooting. Kasey Hill ended the game with 12 points and four assists, but committed three turnovers. KeVaughn Allen led all underclassmen with 12 points, going 2-3 from beyond the arc. Chris Chiozza scored 12 points, adding five rebounds. Jaylen Barford led Arkansas with 18 points, while Moses Kingsley finished with a near double-double, ending the game with 17 points and nine rebounds.

Florida led this game for all but 32 seconds, with only one lead change throughout the entire contest. The Gators officially clinched the second seed in the SEC Tournament with their win over the Hogs on Wednesday night. UF’s first SEC Tournament game will be in the quarterfinals on Friday, March 10 at 7 p.m. vs. the winner of the game between the #7 and #10 seeds.

Mike White, following the game, talked about trying to get all the seniors on the court to end the game, the key qualities of each of the seniors, Keith Stone’s play, gave Arkansas’ offense credit for keeping it close and discussed spending his birthday on Thursday getting ready for Vanderbilt.

Canyon Barry discussed how anybody can get it done on any given night for the Gators.

Florida beats Arkansas by 13 in Gainesville to set up an interesting bubble game this weekend as the Razorbacks will host upstart Georgia.

A Canyon Barry put-back layup, followed by an assist from Schuyler Rimmer to Justin Leon started off senior night on the right note for the Gators. Canyon Barry then hit a three to give Florida a 7-4 lead with two minutes played.

All four seniors scored before the first television timeout at 15:40. Florida led 14-8 at that point in the game and were 6-8 from the field. The Razorbacks only made four of their first nine shots.

At the under-12 minute timeout, Florida led Arkansas, 20-8. A 6-0 run paired with a four-plus minute scoring drought for the Razorbacks were the keys to the Gators’ first double-digit lead of the contest.

The Gators increased their lead to 15 at the under-eight timeout. Arkansas had missed 10 of their last 12 shots at that point in the game and were being outrebounded, 17-5.

Arkansas ended the half on a 14-10 run, but Florida took a 41-28 lead into halftime. Canyon Barry (11) and KeVaughn Allen (10) combined for over half of the Gators’ points in the first twenty minutes. Daryl Macon and Moses Kingsley led the Razorbacks with six points apiece.

The Gators, surprisingly, outrebounded the Razorbacks, 24-13, in the first frame and outscored the Hogs in the paint, 24-12. Florida led in bench points, 13-6, and shot 57% from the floor in the first half. Arkansas made 34% of their first frame buckets and shot 6% worse then UF from three-point range.

The Gators turned the ball over two more times (9-7) in the first half, but outscored the Hogs’ in points off of turnovers, 13-7. UF also had five more assists than UA in the first twenty minutes.

Arkansas went on an 11-7 run out of the half, diminishing Florida’s lead to nine with 14:09 left in the game. During the stretch, KeVaughn Allen was fell to the floor clutching his left leg, and was unable to put any weight on it. He hobbled off to the bench and had his left calf massaged by Duke Werner, the team’s trainer. It turned out to be a cramp, giving Gator fans and staff a huge sigh of relief.

A 13-5 run pulled Arkansas within six points of Florida with 9:34 remaining in the game. During that span, the Gators missed six of their eight shot attempts and failed to score for over three minutes.

An 8-0, near two-minute run put UF back up by 14 with 7:30 left in the game. Canyon Barry continued to excel on senior night, going 5-10 from the floor with 13 points at this moment in the game.

Keith Stone came alive for the first time since January, exploding for eight points and three rebounds in his first nine minutes played. The eight points were the most he’s had since the January 14 game vs. Georgia. He had three points in his past 10 games coming into the Arkansas contest. The Gators led by seven points with just under four minutes left in the game.

Florida will have their final game of the regular season this coming Saturday vs. Vanderbilt in Nashville. The Gators lost their first game to Vanderbilt in January, 68-66, at the O’Connell Center.