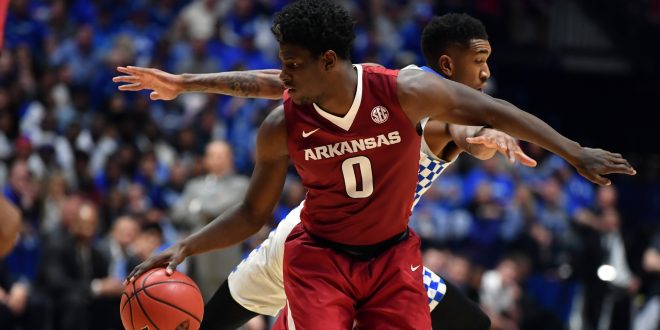 The Arkansas Razorbacks are heading to March Madness.

The team starts as the No. 8 seed in the South bracket and will begin tournament play this Friday. They face No. 9 ranked Seton Hall in the opening round in Greenville, SC.

The Road to the Dance

Arkansas is coming off a 25-9 season and an appearance in the SEC Championship game. They also hold a conference record in 2016 of 12-6, with wins over LSU and Vanderbilt to name a few.

First, the team began the season winning 9 of their first 10 games on their schedule.  They began conference play on Dec. 29 with a home loss against Florida, as they went 1-2 in their first three conference games. Arkansas then got it going, winning five in a row in conference games before a loss to Missouri.

In an SEC coaches’ teleconference, head coach Mike Anderson said he feels the SEC is the best conference in the NCAA.

Arkansas gets to compete in the big dance against the 63 best teams in the nation. They start their journey to Phoenix against Seton Hall.

First and foremost, the Arkansas team is looking at their consistent stars and playmakers to take them to success.

After putting up big numbers in the 2016-2017 season, the team is calling on this trend to continue in March. One of those stars is G Dusty Hannahs, who averaged 14.6 points per game on the season. Another key player will be the 6′ 10″ senior F Moses Kingsley, who leads the team in rebounds per game, with a 7.8 RPG average. Thirdly, Daryl Macon is looking to continue raising his assists per game average, currently at 2.2 per game, to lead Arkansas into round two of the March Madness tournament.

Mike Anderson sees one Seton Hall player  as a threat to the team: Angel Delgado. He believes the way to control him is for the entire team to hold him at the lane.

These players, along with the coaching staff and support of the Arkansas fans, are looking at Seton Hall and nothing else. They are looking to advance further in the tournament and continue representing the SEC. They also look to hopefully make an appearance in Phoenix for the NCAA Final Four.

The opening game between Arkansas and Seton Hall will take place on Friday, March 17 at 1:30 p.m. The game will be broadcasting live on TNT.

We'll tip-off against Seton Hall on Friday at 12:30 p.m. CT on TNT.#SelectionSunday

Friday vs. Arkansas in Greenville it is! #marchmadness #HALLin pic.twitter.com/Hxcb7ZTqq7