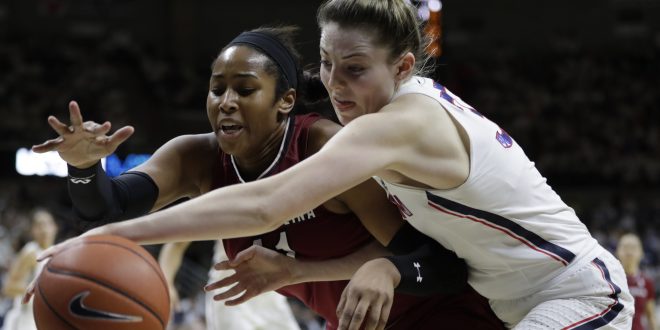 Sixty-four teams are set to face off this upcoming weekend for two more weeks of basketball. While there were some changes this season as compared to the last, some aspects of the tournament look exactly the same…like the four No.1 seeded teams in the different regions.

What Hasn’t Changed in the Last Year? The Four No.1 Seeded Teams

For the 11th straight season, the UConn Huskies are a number-one seeded team going into the NCAA Women’s tournament. With 107 straight wins prior to their first tournament game, UConn has the NCAA’s longest winning streak. Sophomore guard Katie Samuelson leads the time, averaging 21 ppg.

So the age-old question still remain: can anyone end Geno Auriemma and his Huskies’ reign?

The Gamecocks (27-4) are the No.1 seed in the Stockton region and are coming off an SEC title win. This is South Carolina’s fourth straight No.1 seeded appearance. The furthest the Gamecocks have ever gone in the NCAA Women’s Basketball tournament is the Final Four in 2015, when they fell by one point to Notre Dame, 66-65.

South Carolina head coach Dawn Staley announced Tuesday morning that their center Alaina Coates will not be participating in the tournament, due to an ankle injury sustained in the SEC tournament.

In the Lexington Region, the No.1 seeded Notre Dame (30-3) makes their sixth straight appearance as a No.1 seed in the tournament. The Fighting Irish are also coming off a conference championship win of their own, when they dismantled Duke 84-61 for the ACC title. Notre Dame joined the ACC prior to the 2013-2014 season and has all four ACC titles since then.

The Fighting Irish have won the NCAA title once in 2001 and have made it to the finals the last two years.

Leading in the Oklahoma City Region is No.1 seed Baylor (30-3). The Lady Bears are the only No.1 seeded team to not have won their conference’s championship. West Virginia stole the Big 12 title from Baylor, 77-66.

Of course, just because the above teams are the four No.1 seeded teams doesn’t mean they’ll be the teams in the Final Four. Last year, Syracuse made it all the way to the championship game after being seeded No.4 in the Sioux Falls Region. They fell to UConn in the championship game, 82-51.

After defeating Baylor in the Big 12 Tournament, West Virginia is definitely a team to watch. Throughout the season West Virginia defeated a number of ranked teams: Oklahoma twice, Kansas State, Texas, and Baylor finally in the conference championship. The Mountaineers (23-10) hold the No.6 seed in the Bridgeport Region.

Then there’s always the 27-5 Duke Blue Devils to watch out for. The Blue Devils missed last year’s tournament for the first time ever since 1995. Duke has won 8 of their twelve meetups against ranked teams this season, defeating South Carolina once this season and defeated other ranked teams like Kentucky, Louisville, Virginia Tech, and both Syracuse and Miami twice.

And the Conference with This Year’s Most Appearances Is…

✏️️ The entire #ncaaW tournament bracket is ready for your predictions. #SelectionMonday

The Southeastern Conference leads the conferences with the number of teams in this year’s tournament: eight.

The ACC and Pac-12 tie for second in regards to number of teams appearing with seven each, followed by the Big 12 with six, and the Big Ten with four.

This year’s tournament will last for a little more than two weeks, with the first round starting Friday: