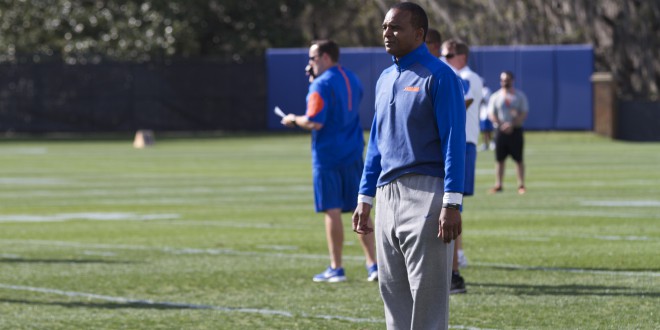 The Gator defense has a lot to live up to coming off last season. After having one of the most impressive defenses in the country, Florida will have a little bit of a new look. To start with, the University of Florida promoted coach Randy Shannon to be the new defensive coordinator. Shannon has been busy this spring preparing his defense for fall 2017.

Younger Players Look to Step Up

Coming into this fall, the Gators will be without eight of their former defensive starters. While this may make Gator fans nervous, there are plenty of young players ready to fill those roles. While they may be lacking in experience, Coach Shannon says they are working hard to key in on each player’s strengths and weaknesses. The hope is that paying close attention to detail will help these players transition smoothly into starting roles.

Speeding Up the Game

There may not be a whole lot of things changing as far as strategies and tactics go, but Coach Shannon did say his goal is to simplify play. Shannon says by making play simple, it will allows players to execute at a faster pace. The goal would be that through simplifying and speeding up play, it would overall allow for fewer mistakes. Coach Corey Bell has helped the players focus on getting their timing down.

Coach Shannon says that the University of Florida has high standards, and the team certainly holds their own set of high standards as well. They are working through spring in what the staff refers to as their “phase system.” Coach Shannon says they are currently working in stage three and are moving in a forward direction. Judging from the focus Florida is holding during spring practices, the Gators will be nothing short of prepared by the time fall rolls around.

Born and raised at the ballpark! Typically quiet- until it comes to sports. I'm a South Florida native with a passion for baseball nearly as strong as my faith. Grew up in garnet + gold, turned out sporting orange + blue. Likely to be found with a camera. And yes, I take food pictures.
@victoriarossman
Previous No. 2 Florida Softball to Take on NDSU at Home
Next Kentucky Aiming for First National Title Since 2012