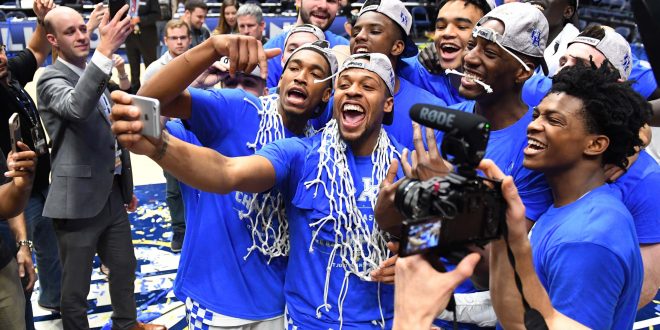 In the SEC, it’s been fairly ho-hum for the Kentucky Wildcats. On Sunday, they routed Arkansas to claim their third-straight SEC championship and cap the season on an 11-game winning streak.

But for the fervent Wildcat fans, it hasn’t been about winning the conference the last few years — it’s been about reclaiming that feeling of being national champions, like they did in 2012.

The team finished the season #6 in the AP Poll and enter the South region as a No.2 seed.

On Tuesday, head coach John Calipari spoke at length about the difficulty of the South bracket. He says it’s the hardest bracket he’s been in

since he began playing in the tournament. Here are a few of the teams joining them in the bracket with their AP Ranking.

According to the NY Times, which amalgamated six different projections including ESPN, Yahoo and 538, Kentucky is expected to:

The projections give Kentucky between a 4-8 percent chance of winning the whole thing. Naturally, the four No. 1 seeds are the favorites. Calipari has said that more than 10 teams have a shot at the Final Four this season, showcasing the heavy parity of the field.

Calipari is ready to go and it’s no surprise why — his team is on an 11-game winning streak and they don’t want to cool off. Granted, the quality of opponent wasn’t great during that streak, but they did beat a 13th-ranked Florida squad who had put UK in a big hole at one point.

The Wildcats know their success depends on their defense, which quite frankly hasn’t been good for a team of their caliber. They rank 160th in the country in opponents points per game, surrendering an average of 71.6 points. And while that’s just about eight points more than, say, 20th-ranked Liberty, it’s a huge margin.

Coming together at the right time of the year. pic.twitter.com/iJ3ZQWJmdT

But they might be able to get away with giving up 71 points a game if they can continue posting up 85+. The team is fourth in the country, averaging 85.9 ppg. They also beat up opponents on the glass, clocking in at 12th overall with 40 rebounds per game.

Star guard Malik Monk is going to be the catalyst of the offense. He leads his squad with 20.4 ppg with a 45.7 field goal percentage. But it’s not a one-man band. Freshman De’Aaron Fox averaged 22 points over three games in the SEC Tournament and was named MVP. Freshman center Edrice Abedayo is listed at 6′ 10″ and 260 pounds, but he’s deft enough under the basket to have a whopping 60 percent field goal percentage.

Kentucky begins play on Friday, March 17 at 9:30 p.m. in Indianapolis on CBS.