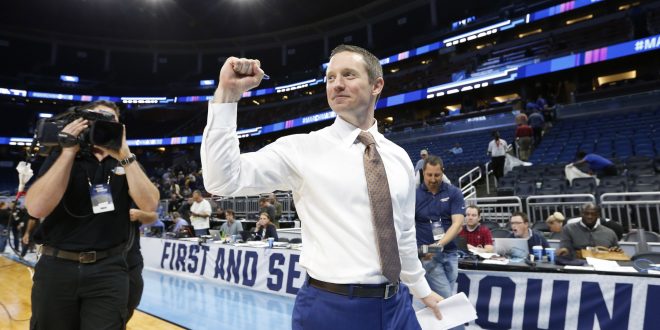 In a game of speed, it was the Gators’ talent that prevailed. The Florida Gators took down the East Tennessee State University Buccaneers, 80-65, in the Round of 64 in Orlando on Thursday evening. The Gators forced 17 turnovers and turned them into 20 points. Devin Robinson tied his career-high with 24 points on 10-17 shooting, while grabbing 7 rebounds as well.

Chris Chiozza and Kasey Hill were vital in the backcourt working as Florida’s floor generals. Chiozza ended the contest with 14 points, 5 rebounds and 3 assists, while Kasey Hill notched 14 points, 6 rebounds and 5 assists. The pair also combined for 3 steals. Kevarrius Hayes had a nice stat-sheet night as well, recording 7 points, 7 rebounds, 6 steals and 2 blocks.

The win marks Florida’s first NCAA Tournament victory since the 2013-2014 season. Florida will take on the Virginia Cavaliers on Saturday, who took down UNC-Wilmington, earlier on Thursday afternoon.

Mike White gets his first NCAA Tournament win ever as Florida beats upstart ETSU. Gators will get Virginia on Saturday. First to 35 wins.

Devin Robinson opened the scoring with a ferocious slam-dunk off of an ETSU turnover. The Gators continued to work it inside as Kevarrius Hayes took advantage of an open lay-up on the next possession.

A 6-0 run would force the Buccaneers to take their first timeout with 3:13 played in the first half. Kasey Hill had four points in that span as he got Florida into their transition offense early and often.

The Gators would expand their lead to eight with just over five minutes played in the contest. Devin Robinson’s dunk total rose to three in that span as he totaled eight points on 4-4 shooting early in the game.

T.J. Cromer, ETSU’s most volatile scorer, picked up his second foul with about eight minutes played in the game. The Gators opened up the game 7-9 from the free throw line, taking a 22-14 lead with 10:50 left in the first twenty minutes.

After a two-plus minute scoring drought and a span where they went one of nine, the Gators lead was shortened to only four with 7:45 left in the first half. Robinson had 10 points at that point in the game, while T.J. Cromer had eight for his team.

ETSU tied up the game at 28 with 5:58 left in the first half on a David Burrell three-pointer. The Bucs opened the game up 4-9 from beyond the arc.

Kasey Hill ended Florida’s three-point drought with less than three minutes left in the first half. The Gators were 1-9 from beyond the arc at that point, but led by three.

UF took a 33-32 lead over ETSU into halftime. Devin Robinson and T.J. Cromer both led their respective teams with 10 points and coincidentally both had two rebounds. East Tennessee State outshot

The Gators turned the Bucs’ nine turnovers into nine points, while ETSU was only able to convert Florida’s seven giveaways into two points. UF went 8-13 from the free throw line, while East Tennessee State didn’t attempt a single shot from the charity stripe in the first half.

ETSU outshot Florida from the floor, 48%-43%, and 36%-10% from beyond the arc. Both squads had eight assists in the first twenty minutes. The Gators failed to score in the last 2:46 of the first frame and committed four turnovers during the final five minutes and 28 seconds of the first half.

ETSU took their first lead of the game on the first shot of the second half. The Bucs led 35-33 at that point before a Devin Robinson dunk tied the game back up at 35.

Robinson continued to jumpstart the offense, totaling 18 points after 26 minutes of play. With 14 minutes left, KeVaughn Allen hit his first basket of the game after starting 0-7 from the floor. His shot put Florida up by eight with 14:02 left in the contest.

The Gators took a 12-point lead off a made Kasey Hill free throw. Contributing to Florida’s double-digit lead was the Bucs’ inability to hit a shot for over four minutes. UF led 55-43 with nine minutes left in the contest.

With just three minutes left, a Chris Chiozza steal and lay-in would put Florida back up by 12 points. Chiozza hit double-digit scoring on the play and was pivotal in restarting the Gators’ offense as it stalled near the three-quarter mark of the second half.

Florida closed the game on a 14-9 run to take down East Tennessee State University, 80-65. The Gators will take on the Virginia Cavaliers next in the Round of 32 on Saturday in Orlando.