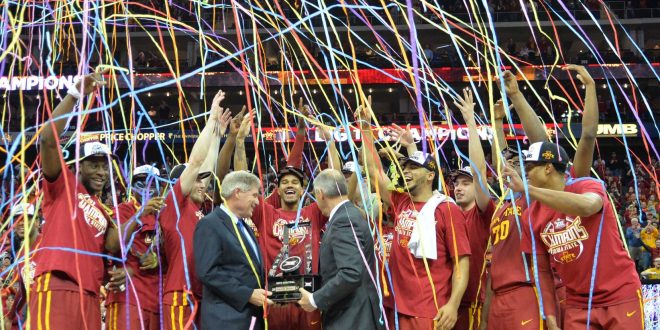 March Madness is finally back as the top 64 teams in the country are fighting to simply survive and advance. Two of the hottest teams in the nation, Iowa State and Nevada, face off in the round of 64 for the opportunity to play the winner of Purdue and Vermont. The five vs twelve matchup has produced much more competition than expected over the past decade and a half, with the five seeds owning a 36-28 record over the twelve seeds since 2001.

This battle of two high-octane offenses could go down to the wire. The fifth seeded Iowa State Cyclones have won nine of their past ten games including an 80-74 win against West Virginia in the Big 12 Championship. The 12th seeded Nevada Wolf Pack have won nine games in a row, including blowouts against Utah State, Fresno State, and Colorado State in the Mountain West Tournament. The Wolf Pack have won by an average of 15 points per game during this nine game winning streak.

What Iowa State Must do to Win:

The Cyclones need to keep stroking the ball from deep at a highly efficient rate. ISU averages 10.0 three-pointers made per game, which ranks tenth in the country. They also rank 13th in the country in three-point percentage at 40.2%, including 45% since the beginning of February.

The dominant senior trio of Monte Morris, Nazareth Mitrou-Long, and Deonte Burton must run the show for the Cyclones. Morris is the best overall player on the team and is arguably one of the best all-around point guards in the country. The Flint, Michigan native is averaging 16.3 points, 4.8 rebounds, 6.1 assists, and 1.5 steals per game while shooting 38.9% from beyond the arc. He is averaging a 5.71 assist-to-turnover ratio this season, which is the best in the country by a mile. The next best ratio is 4.20.

Morris is Iowa State’s all time leader in assists and steals, and is a major reason why the Cyclones own the country’s fifth best assist-to-turnover ratio at 1.56. This trio was all part of the team that lost to UAB as a three seed in the first round of the 2015 NCAA tournament. It’s hard to believe that they will let another double-digit seed upset them in the round of 64, especially with all of the experience they have.

What Nevada Must do to Win:

Nevada must get their trio of Marcus Marshall, Cameron Oliver, and Jordan Caroline going offensively. While Marshall has been their go-to scorer all season (19.8 ppg), Caroline has been extremely hot as of late.  He has averaged 18.3 points and 10.8 rebounds per game in his last four games, while taking home the MVP honors of the Mountain West Tournament.

Nevada isn’t a huge team, with no player above 6’8″. However, they have 11 players over 6’6″, including four players who average more than 5.0 rebounds per game. Nevada currently averages 38.9 rebounds per game compared to Iowa State’s 34.9. The Wolf Pack must own the defensive glass while creating numerous second chance opportunities on the offensive end.

Sounds of the Game:

Iowa State head coach Steve Prohm offered some praise and advise for his squad and explained why his team can’t overlook the lower seeded Wolf Pack.

While the experts have Iowa State pinned as the six point favorites, expect this game to be decided in the final five to ten minutes of action. Both high-powered offenses should keep the game interesting, but the Cyclones have too much talent and experience to lose this game.