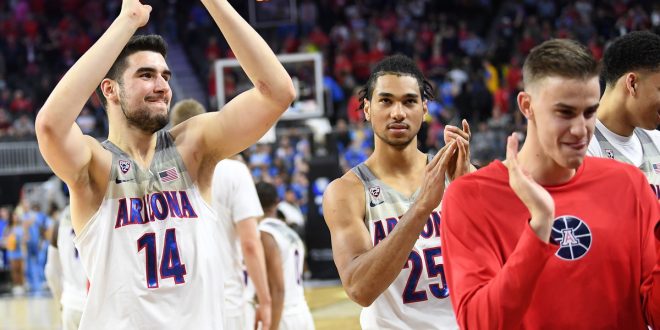 The Arizona Wildcats (30-4) finished the 2017 schedule in a tie with Oregon as Pac-12 regular season conference champions. After being embarrassed 85-58 against the Ducks in the regular season, the Wildcats avenged that loss with 83-80 conference tournament championship victory over Oregon.

Now, the West’s No. 2 seed will enter the Big Dance with a first round matchup against 15-seed North Dakota (22-9). Along with the seeding advantage, the Wildcats are headed into this game having won 24 of their past 26.

If history is any indication of this first round, Arizona should have no problem cruising past the Fighting Hawks. These two teams have never met, but UA holds a 63-2 advantage over first head-to-head meetings in the past 25 years. Simply put, Arizona has more experience in this type of competitive environment, and their playmakers are anxious to get things started.

Sophomore Allonzo Trier and freshman Lauri Markkanen were both named to the Pac-12 All-Tournament team after averaging around 20 points apiece in UA’s three-game span. Trier was named the tournament’s Most Outstanding Player after shooting 50.0 percent from behind the arc, and Markkanen made 47.1 percent of his three-pointers.

Even more impressive, Arizona’s Parker Jackson-Cartwright is 17-of-25 from deep in his past eight outings.

As the saying goes: live by the three, die by the three. The Fighting Hawks have held their opponents to 35 percent from three-point range this season, so that could be a determining factor in this game.

Arizona holds a slight advantage at the free throw line, shooting 75.8 percent to North Dakota’s 71.8 percent. Second chance opportunities will be huge for the Wildcats, considering their rebound margin of +6.8 compared to North Dakota’s +1.0.

According to North Dakota’s leading scorer Quinton Booker, Arizona is a long, athletic team that plays great defense, and UND’s focus will be rebounding. North Dakota head coach Brian Jones echoed the same message, and said the Fighting Hawks must “value the basketball.”