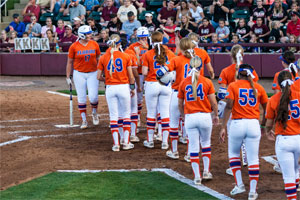 Gators head home with a 5-1 win over the Noles

Delanie Gourley and Aleshia Ocasio combined for the fifth no-hitter in school history as Florida beat South Carolina Sunday 10-0 to complete a three game series sweep.  In fact, Carolina only scored one run the entire weekend against the Gators.

Offensively, things were quiet until the third inning; that’s when Sophia Reynoso hit a two run homer and Jaime Hoover smashed a three run triple to give the Gators a 5-0 lead.

Florida scored again in the fourth inning as Nicole Dewitt hit an RBI single, Kayli Kvistad drew a bases loaded walk and Hoover hit a two run single to help her set a career high for runs batted in during a game.   Nicole DeWitt drove in the final Florida run with a sacrifice fly in the fifth inning.

Delaine Gourley and Aleshia Ocasio were both outstanding Sunday.  Gourley threw four innings on Sunday and Ocasio helped wrap up the sweep in the fifth with one inning of relief work.  The combined no hitter was Florida’s first since 2010 when Stephanie Brombacher and Erin Schuppert served one up against none other than the Gamecocks.

The Gators hit four home runs in the series against South Carolina and secured 10 extra base hits. Florida is now 26-1 on the season and the Gators will play USF on Wednesday night at 6pm at Katie Seashole Pressly Stadium.