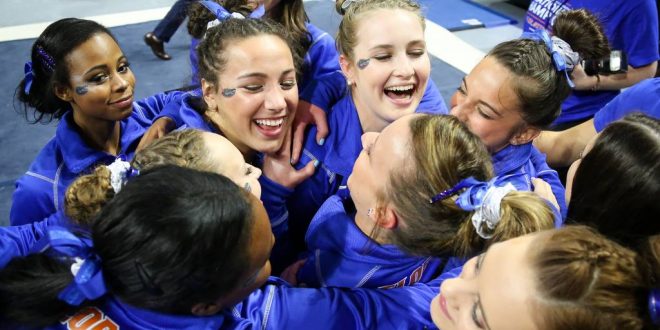 The fourth ranked Florida Gators gymnastics teams finished second overall with a final score of 197.825 at the SEC Championships Saturday night in Jacksonville at the Veterans Memorial Arena. The 2017 SEC champion is LSU, who received a score of 198.075. Florida’s score was its highest away score of the season as the Gators entered the championship with an overall regular season record of 8-2 and a conference record of 5-2. Florida coach Jenny Rowland says she could not be more proud of her team, despite the second place finish.

Congrats to @LSUgym for winning the #SECGym17 title! #Gators come in 2nd with a 197.825, UF's highest away score, 3rd highest of the season!

Kennedy Baker started out the second rotation strong with a collegiate best of 9.925 on the beam. She was the top performer for the Gators in this event. Alex McMurtry and Rachel Gowey followed her with tied scores of 9.900. Baker came in fourth overall for this event. Florida finished in second place after the second rotation with a running score of 98.825. LSU continued to lead the competition with a score of 99.025. Alabama moved to No.3 with a score of 98.650 and Georgia trailed in last with a 98.175.

The Gators moved onto the floor for the third rotation. Kennedy Baker and Alex McMurtry were the top performers for the Gators on the floor with a tied score of 9.950. Overall, Baker and McMurtry tied for first with LSU’s McKenna Kelley and Ashleigh Gnat, who all received a score of 9.950. LSU ended the third rotation still in first place with a 148.525, the Gators second with a 148.300, Alabama finished third with a 148.050, and Georgia finished last with a score of 147.425.

For the final rotation, Florida was on vault. Rachel Slocum and Alex McMurtry were the top performers for the Gators on this event with scores of 9.950. Slocum and McMurtry tied for second overall with LSU’s Ashleigh Gnat beating them with a perfect 10. Gnat’s 10 on bars was the only 10 of the night.

Alex McMurtry, Rachel Slocum, and Amelia Hundley made the All SEC team. Hundley and Rachel Gowey also made the All Freshman SEC team.

The Gators will be back in Gainesville on April 1 for the NCAA Gainesville Regional meet. Junior co-captain Alex McMurtry says this season is far from over.

Sydney is a senior studying telecommunications with a specialization in sports media at the University of Florida. She is a multimedia sports reporter for ESPN 98.1 FM/850 AM WRUF and WUFT-TV.
Previous Gator Baseball Drops Series to Auburn
Next Gators No-Hit South Carolina To Sweep Softball Series