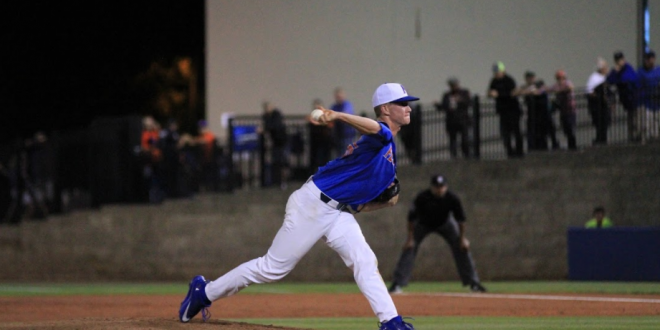 The Gator baseball team did not start it’s SEC portion of the schedule the way it wanted to, getting swept by Auburn in their first conference series of the season. The sweep was clinched by a 6-5 Auburn win in the series finale thanks to a walk-off bunt from Tigers center fielder Jonah Todd.

The loss drops Florida to 13-8 on the season, 0-3 in the SEC, and 0-6 on the road, continuing the woes away from home for the Gators. After the game, Florida head coach Kevin O’Sullivan said the team is going to have to learn to how to play on the road.

The Gators sent Jackson Kowar to start on the mound for this one looking to salvage a win in the series. Kowar picked up a no decision, going 6.0 innings but giving up six hits, five total runs, two of them earned, and walking three batters.

Mike Rivera back in the lineup today, Dalton Guthrie at DH, Hicks at SS.#JackSunday on the mound for the #Gators – 3-0, 2.19 ERA. pic.twitter.com/j7pZNh3oKj

The Gator lineup tagged the Tigers starter, Daniel Davis, for four runs in just 2.1 innings before he was relieved by Corey Herndon. Andrew Mitchell (4-0) earned the win after tossing a scoreless top of the ninth inning that included two strikeouts. Frank Rubio (0-1) took the loss for Florida after giving up three hits and the game winning run.

Offenses Jump out of the Gates

The two teams got off to a good start offensively, with the score tied at 4-4 after just three innings.

The Gators responded with a four-run top of the third inning, with the offense showing signs of life that haven’t been there for more than a few games this season.

JJ comes through!! A two-run single and #Gators take a 3-1 lead. pic.twitter.com/J7Djd5tmUw

Nelson Maldonado brought home the fourth and last run of the inning for the Gators with his sacrifice fly that scored India. The Gators showed offensive improvement in the game, exemplified in that third inning, as noted by O’Sullivan after the game.

The lead didn’t last long for Florida though, as Auburn came back with three runs of their own in the bottom half of the third inning thanks to a couple of Gator mistakes. An error by Christian Hicks at shortstop gave Auburn their first two runs of the inning to make 4-3 Florida. Kowar then threw a wild pitch that scored first baseman Daniel Robert to tie the game at 4-4.

Hicks and Todd traded sacrifice flies in the fifth and seventh inning respectively that made the game 5-5 heading into the final two innings. The Gators were unable to get any runs or hits in the last two innings, going down 1-2-3 in both the eighth and the ninth.

Florida sent Frank Rubio on the mound in the bottom of the ninth to try to send the game to extra innings, but instead he suffered his first loss of the season thanks to another Gator miscue. Tiger lead off man Blake Logan singled and nine hole hitter Will Holland laid down a bunt to the right side that no one could field for a base hit.  Lead off hitter Jonah Todd also bunted but Rubio misplayed it and threw the ball away trying to throw the runner out at third base.   The ball went down the left field line and the winning run scored for the Tigers.

O’Sullivan said he thinks the team took the loss because the Gators “shot ourselves in the foot defensively.”

The Gators will look to rebound Tuesday against Stetson, looking to shake off their mid-week struggles this season. They’ll resume SEC on Friday when they host LSU for a three-game series.