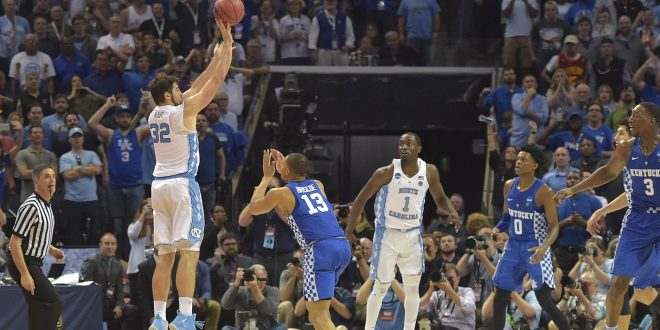 North Carolina is all too familiar with game winning shots. Last year in the NCAA Championship against Villanova, the Tar Heels believed they had the game-tying shot when Marcus Paige made a double-pump fake behind the arc and made the shot with just four seconds to go. It turned out to be too much time left on the clock because the Wildcats went down the court and Kris Jenkins put up the game-winning three to snatch the title from UNC’s grasp. This year they were able to flip the script.

With just 7.2 seconds on the clock, Kentucky’s Malik Monk drained a three to tie the game with North Carolina. Neither team called a time out, so UNC’s Theo Pinson drove the ball down the court. Right when it seemed like he would attempt to push the ball in the paint he passed it to an open Luke Maye who was standing on the three-point line when he took the shot. Maye’s shot was good, giving the Tar Heels a two point lead with 0.3 seconds left.

Maye, a sophomore, scored a career-high 17 points off the bench. Justin Jackson led North Carolina with 19 points and Joel Berry II had 11 points while playing with a sprained ankle.

Kentucky thrived this season once again with star freshmen players. The leading scorers for the Wildcats in the regional final were freshmen Edrice Adebayo and De’Aaron Fox both with 13 points and Monk with 12 of his own. In post-game interviews, Adebayo and Fox were very emotional as they realized their season was over.

This will be the 20th Final Four appearance for North Carolina and their sixth under head coach Roy Williams. After the game, Williams said he was proud of his team for coming out with the win.

Out of all the Final Four teams, the Tar Heels have by far the most experience playing at this stage. The other national semifinalists are Oregon, who hasn’t been to the Final Four since 1939, and South Carolina and Gonzaga, who are both making their first ever appearances. North Carolina will play Oregon on Saturday in Glendale, Arizona where they are the favorites to win it all.