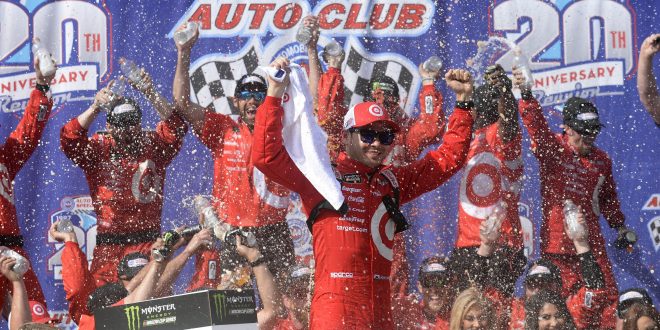 After a strong push at the end of the race, Larson regained the lead on the final restart and held off Joey Lagano, Martin Truex Jr. and Kyle Busch to bring home his second career cup win.

The 24-year-old broke into the scene last year after getting his first win at Michigan International Speedway last summer.

Since his win at Michigan International Speedway, Larson has 11 top-10 finishes in 17 races.

Minor Setback For A Major Comeback

After a speeding penalty that sent him to the back of the field midway during the race, Larson showed great determination to make his way back into the field.

Larson said he tried to remain calm during the heat of the final moments in the race yesterday, noting that previous losses have helped him learn to handle those situations better.

After three consecutive second place finishes, Larson was happy to finally get his second win in 116 cup starts.

Making his Cup debut in 2014, Larson was hailed to be the next great NASCAR driver.

However, the learning curve was steep for Larson. Recent finishes have shown that the young driver now seems to have started figuring everything out.

The Chip Ganassi Racing team driver guaranteed himself a spot in the playoffs after the victory yesterday.

Larson is currently sitting atop the Monster Energy NASCAR Cup Series with 59 points. He will look to continue his streak of four consecutive top-two finishes on April 2 at Martinsville Speedway.