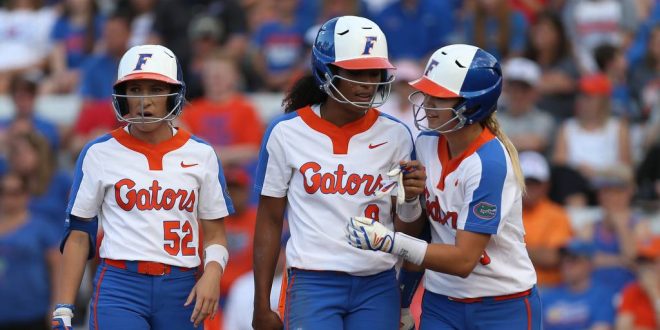 The Florida Gator softball team earned its 1,000th victory in program history with a 6-1 over Arkansas on Friday.

Kelly Barnhill started in the circle for the Gators and got the win and freshman Jaimie Hoover brought to life to the Florida offense.

The Gators scored all of their six runs during the top of the fourth inning after trailing early 1-0.  Hoover had a career-high three hits, with an RBI and a run scored.  Two of her three hits came in the big fourth inning.

The freshman led the inning with a single and Janell Wheaton also reached base.  Freshman Jordan Roberts drove them home with a double to give the Gators a 2-0 lead.  Sophia Reynoso plated a run with a sacrifice bunt and Amanda Lorenz hit a two run home run as well.  Hooever pushed across the sixth run of the inning with an RBI single that scored Nicole Dewitt.

That was more than enough run support for Barnhill who ran her record to 12-0 on the season.

The Gators will return to action Saturday against the Razorbacks.