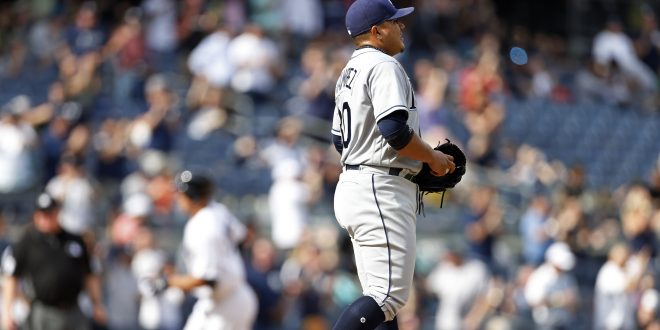 This series has been everything but good for the Tampa Bay Rays. The series started on Monday, as the Rays took on the New York Yankees from the Bronx their home opener. This was a game to remember for Yankees starter Michael Pineda, who had a no hitter until it was disrupted by Rays third baseman Evan Longoria. Longoria hit a shot into the left-field corner for a double that finally gave the Rays a spark to put points on the board. It stopped the Yankees  from earning the no-hitter,  but it did not ultimately help the Rays avoid the loss. The Yankees took game one by the score of 8-1.

After the beating the Yankees gave the Rays on Monday, the Yankees decided to give their new LHP Jordan Montgomery a chance. For a new pitcher with big shoes to fill, he didn’t look half bad. Montgomery pitched 4.2 innings, gave up three runs and only two were earned. The lefty also racked up seven strikeouts in his debut. By the end of the 5th inning, the Rays were up 3-2. 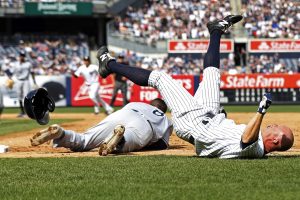 In the bottom of the 6th inning, Yankees outfielder Brett Gardner was involved in a major collision at first base with Rickie Weeks Jr. Gardner left the game and never returned. By the end of the 6th inning, the Yankees had taken the lead 6-3. It didn’t seem like the game was over, until Aaron Judge put the nail in the coffin with a 2-run homer in the bottom of the 7th to take the 8-3 lead. That would be all the Yankees needed to take game 2, which ended with the score of 8-4.

Tonight will be the final game of the series as the Yankees look to sweep the Rays in the three game series. The Yankees started the season losing three out of their first four games ,and now sit at .500. Another win tonight could be big for the Yankees. As for the Rays, they’ll need to keep their heads up. There is certainly plenty of baseball left to be played. Tonight’s game from Yankee Stadium has first pitch scheduled at 7:05.