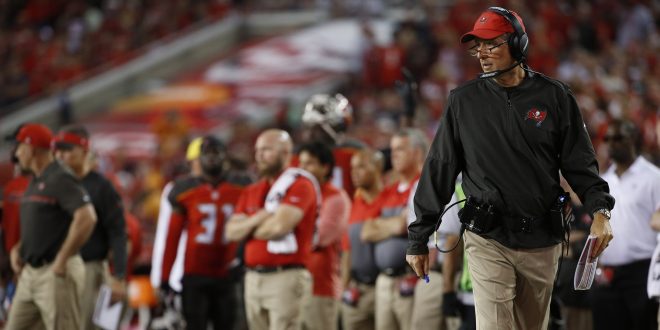 The Tampa Bay Buccaneers are set to appear on the 12th season of “Hard Knocks” for the first time. The five-episode run will air Tuesdays from August 8 to September 5. Cameras will track every Bucs movement ahead of their season opener.

Watch how the Bucs, @HBO​ & @NFLFilms​' historic Hard Knocks announcement unfolded through the eyes of our https://t.co/tUU9a5Os8d cameras. pic.twitter.com/3XDi5mGMTP

During a press conference for the team, head coach Dirk Koetter wasn’t too happy to be featured in the episodes but said he likes to watch the show.

While we don’t know who will be the “star” of the show, here are some likely candidates.

The most likely candidate could very well be quarterback Jameis Winston, as he tends to be a walking sound bite.

There are other sides to Winston that not many people get to see, such as the side that sends out personalized video greetings from his iPhone to terminally ill children. He also won a 5K for the Juvenile Diabetes Research Foundation in memory of his late grandmother, Myrtle Winston. However, Winston is also no stranger to controversy, which includes legal trouble during his time at Florida State.

Another player the show could star is defensive tackle Gerald McCoy, who not only has lots of talent on the field but also a great personality to match. Defensive end Robert Ayers brings an edge to the team and is know for being a straight shooter.

Wide receivers Mike Evans and DeSean Jackson are also expected to make a big impact on the team this season, and that could shine through on the show. Look for whoever the Bucs take in the NFL Draft to also be featured prominently on the show.