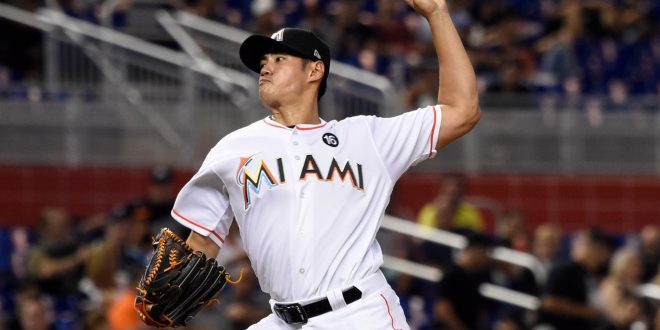 The Miami Marlins are on the hunt for revenge. Coming off a 4-2 loss at home to the Tampa bay Rays, these teams will face off once more.

After the opening game in the Citrus Series against Tampa Bay, Miami will say the loss stings.

Coming up short at home, Miami would create some shining moments and optimism for revenge in Tuesday’s showdown. Firstly, one beacon of light comes from SP Wei-Yin Chen [2-1, 4.33 ERA]. Chen would impress on Monday, posting two runs, striking out seven and walking four frames out of six.

The game would take a turn for the worst when Rays 2B Brad Miller would steal two bases on Monday. This follows a leadoff walk from RP Junichi Tazawa in the eighth, Miller would bolt to second and third bases. This sets up Miller in a great position for SS Daniel Robertson‘s two-out RBI single, giving the Rays a two-run advantage against Miami. Miller would take advantage of Tazawa’s delivery to steal both bases in one run.

Monday’s game would also provide a humorous moment when a fan would dive into the Marlins pool to reach a foul ball that had gone into the crowd. This makes the loss on Monday a little better with some lighthearted humor at Marlins Park.

One of the most crucial moments of the game would take place when OF Kevin Kiermaier created some controversy during Monday’s win for Tampa Bay. The Marlins would challenge his it was his disruptive slide at second base. Miami then would challenge the play, claiming Kiermaier is in violation of Rule 6.01(j), which deals with legal slides. The review would take two minutes and 59 seconds, with the ruling being confirmed in favor of the Rays. This would put them in the lead 3-2.

A final score by Miller would end all hope for Miami, resulting in the 4-2 score and a Marlins loss.

The roof and wall will be CLOSED tonight for our game against Tampa Bay.#LetsPlay pic.twitter.com/9L2wtymhl9

Firstky, the Marlins are on the hunt to get the win against Tampa Bay. They look to turn to SP Edinson Volquez [(0-3, 4.44 ERA], who looks to gain his first victory with the Marlins on Tuesday night. Volquez boasts a 3-1 record with a 3.65 ERA against the Rays during his career.

Secondly, Tampa Bay is calling upon SP Alex Cobb to start for the Rays on Tuesday. This will be his first Interleague start since his Tommy John surgery. He gets the call to start for the first time since Aug. 10, 2014 at Chicago. Cobb holds a lifetime record of 7-3 with a 3.03 ERA in 12 Interleague games. He looks to make it eight with another victory for Tampa Bay on the road in Miami.

Finally, this game between the Miami Marlins and the Tampa Bay Rays will be broadcasting live on FOX Sports Florida. The game will begin at 7:10PM and takes place at Marlins Park in Miami, Fla. In addition, live coverage can be found by following the Marlins and Rays on Twitter, as well as here on ESPN Gainesville.