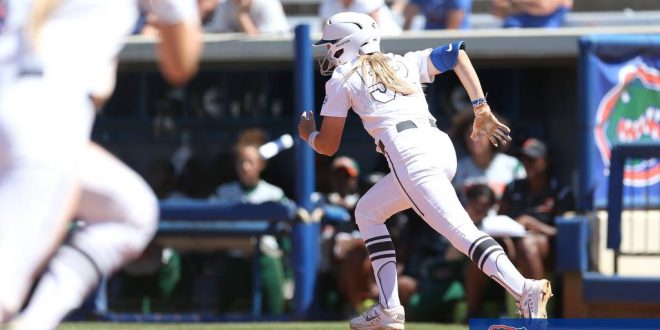 The Gator softball team closed out its regular season on Sunday at home with back to back wins over North Texas and Florida A&M, giving them a 50-5 record as they get set to play in the SEC Tournament this week in Tennessee.  Florida beat North Texas 8-1 and Florida A&M 7-0.

The Gators played North Texas in the first game Sunday.  The Mean Green had one more chance to get a win but sophomore Gator pitcher Kelly Barnhill had something to say about that as she struck out 11 in five innings while allowing one run.  Freshman pitcher Katie Chronister took over for Barnhill for two innings and secured three strikeouts.

The Gators also performed great offensively. Florida scored a pair of runs in the first inning, and scored three more in the fourth to secure the win. Nicole DeWitt had three RBI on the day while Kayli Kvistad and Amanda Lorenz each scored three times.

In the second game of the day, the Gators got a 7-0 victory over the Rattlers from Florida A&M. Delanie Gourley struck out the first seven batters she faced in the circle for Florida and in 4.2 innings she fanned 13 hitters.  Kelly Barnhill threw 1.1 innings and struck out three and Aleshia Ocasio also pitched and had three strikeouts to give the Gators 18 strikeouts in the game, tying a school record.

Offensively, Justine McLean’s RBI put the Gators on the board first when her single sent in Ocasio. An RBI walk by Kayli Kvistad scored McLean to give the Gators a quick offensive start.

Aleshia Ocasio and Chelsea Herndon showed some power in the fifth inning with back-to-back home runs. Alex Voss and Ocasio also scored two runs in the game for the Gators.

T5 | Back-to-back HOME RUNS..Herndon goes yard to right center and pushes the lead out to 7-0!

The Gators will head to the SEC Tournament in Knoxville, Tennessee; their first game is set for Thursday. First pitch will be at 2:30 against the winner of the Ole Miss-Mississippi State game.