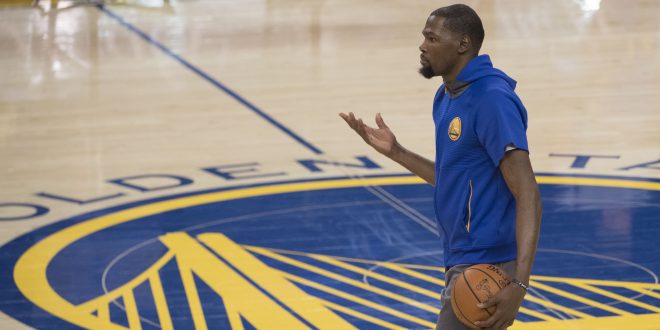 The Cleveland Cavaliers and the Golden State Warriors are back in the NBA Finals for the third consecutive year.

The Warriors are favored to win Thursday nights game by seven points.

The Warriors had the best record in the league during the regular season and went undefeated in the playoffs. Meaning they will hold home court advantage in the best-of-seven series.

Golden State is looking stronger than ever this postseason having recorded three consecutive four-game sweeps over the Portland Trail Blazers, Utah Jazz and San Antonio Spurs. They are the only team in NBA history to reach the NBA Finals with a 12-0 record.

Since signing with the team in the offseason, Kevin Durant has been a huge impact on the Warriors season. The All-Star small forward is averaging 25.2 points, 7.8 rebounds and 3.7 assists.

The Cleveland Cavaliers have the 22nd ranked defense in the NBA this season. They’ll need to improve on their defense to even consider winning the title for the second time in a row. The Cavs only lost one game on the path to the Finals against the Boston Celtics.

Cleveland did not play good defense in the first round against Indiana, but have looked much sharper the past couple of rounds. But now comes the real test for the Cavaliers.

A positive aspect of Cleveland’s play is their bench scoring, which is stronger than the past two years. The midseason additions of Kyle Korver, Deron Williams and Derek Williams have greatly improved their second team play on offense.

Game 1 of the NBA Finals is set to begin at 9 p.m. with live coverage on ABC. You can also listen to the game on ESPN Gainesville 98.1 FM, WRUF 850 AM, with coverage starting at 8. Game 2 is scheduled for Sunday, also in Oakland.