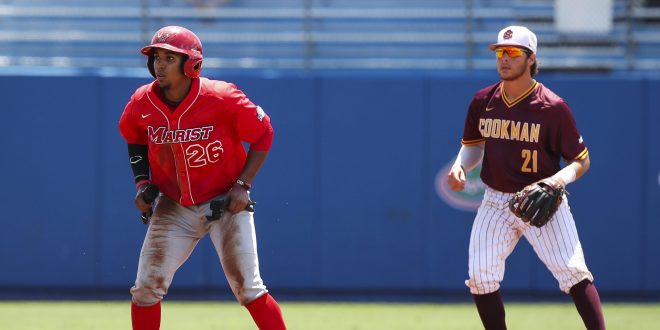 A day after tallying 12 hits in a 10-6 loss against the Florida Gators, the Marist Red Foxes struggled to find their offensive rhythm in the first elimination game of the Gainesville Regional. Marist is heading home after falling to the Bethune-Cookman Wildcats by a score of 4-2.

Marist struck first in the opening frame when Tyler Kirkpatrick walked and proceeded to steal second base. Randy Taveras followed with a single to move Kirkpatrick to third. Frankie Gregoire then picked up a RBI on a sacrifice fly and put the Red Foxes up 1-0.

Metro Atlantic Athletic Conference(MAAC) pitcher of the year, Charlie Jerla got the start for Marist. Bethune-Cookman scored two early runs to take a 2-1 lead in the first when Nate Sterijevski singled to left. Jameel Edney homered to left field to add another and make it 3-1 after five innings. Mike Coss replaced Jerla in the seventh and promptly gave up a RBI single to Adonis Lao to make it a 4-1 lead for Bethune-Cookman.

Bethune-Cookman starter Tyler Norris settled down after the first. He threw 51 pitches through the first three innings but totaled only 88 pitches after seven. Shortstop Randy Taveras had three hits on the day and was the only Marist player that seemed to find success against Norris. His eighth-inning solo homer cut into the Bethune-Cookman lead to make it 4-2. Norris went the distance for the Wildcats giving up just two earned runs, six hits, and two walks. After the game, Bethune-Cookman head coach Jason Beverlin touched on how Norris built momentum through the start.

Wildcats get it done!

Bethune-Cookman keeps its season alive by holding off Marist, 4-2, in Gainesville. #RoadToOmaha pic.twitter.com/CaMZVJV4fu

Bethune-Cookman will face the loser of tonight’s Florida-USF matchup. The Wildcats opened up Gainesville Regional play with a loss to the Bulls. USF leads the all-time series between the two schools 59-16. If the Gators fall to USF tonight, they’re no stranger to facing Bethune-Cookman. Florida has won 31 of 31 games all-time against Bethune-Cookman.

Bethune-Cookman vs. USF/Florida: Sunday at noon.