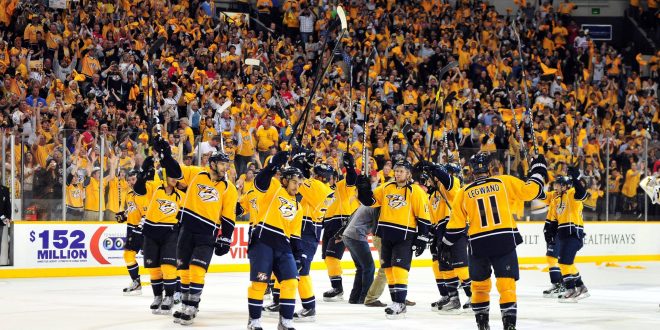 Can the Predators Tie it Up at Home?

The Nashville Predators are looking to even the Stanley Cup Finals tonight with a Game 4 win. After blowing out Pittsburgh on Saturday 5-1, Nashville has a shot to force at least a sixth game.

The Pittsburgh Penguins cruised through the first two games, but even Nashville players admit that their fans create an oppressive environment for the other team. If Nashville can work their home-ice advantage at every angle, an evened series should be within reach. However, the fans can only do so much.

So far, the top Predator has been goalie Pekka Rinne. Rinne saved a whopping 27 out of 28 shots from the Penguins, only allowing one point. If Rinne can continue to save Nashville’s lackluster defense, then the Predators will have a good night. If for some reason he cannot find his groove, the Penguins could win in 5.

Nashville is hungry for a 2-2, but Pittsburgh would also really like a 3-1. Pittsburgh will have a difficult time breaking Nashville’s 8-1 home-ice postseason streak. But, last year the Penguins beat the Sharks at home during Game 4, creating a 3-1 at this point. It will be interesting to see how last year’s reigning champs will handle this year’s similar scenario. Catch this exciting game tonight at 8 p.m. on NBC.