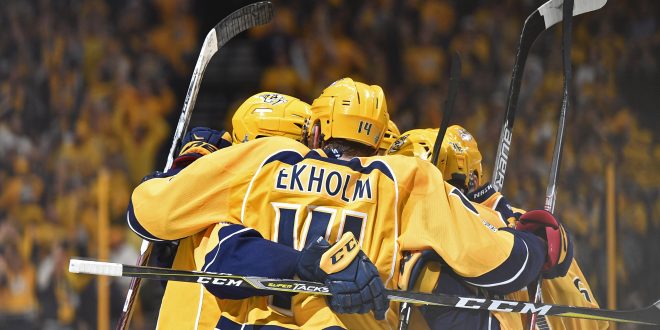 In front of raucous crowds at Bridgestone Arena in Nashville, the Predators have been nearly unbeatable this postseason.

The Preds took down the Penguins 4-1 in Nashville to tie up the Stanley Cup Finals at 2-2. The win pushes Nashville to 9-1 this postseason on home ice and makes the fight for Lord Stanley’s Cup essentially a three-game series.

The @PredsNHL have posted the top home record in the 2017 #StanleyCup Playoffs (9-1, .900), outscoring opponents 34-15 in those games. pic.twitter.com/dV7qAFsqNb

Pekka Rinne, after a shaky first two games in Pittsburgh in which he gave up eight goals on just 36 shots, was fantastic for Nashville. He made 23 saves on 24 shots, including a ridiculous triple save midway through the second period.

Much had been made about Rinne needing to step up like the Conn Smythe candidate he had been through the playoffs, and he’s played like one the past two games. Since the series returned to Nashville, Rinne has allowed just two goals in two games while posting a .961 save percentage. His play prompted PK Subban to say after the game that Rinne “is the backbone of our team” while Preds head coach Peter Laviolette called him the “difference maker.”

On the offensive side of the ice, Nashville got it done with a team effort. 12 different players had a point in the game, including Frederick Gaudreau. Gaudreau scored his third goal of the series in the second period, becoming the first player in history to score his first three playoff goals in the Stanley Cup Finals.

Meanwhile, for Pittsburgh, their one goal came off a breakaway from Sidney Crosby and Matt Murray gave up at least three goals for the second straight game. Both goaltenders have struggled away from their home rink, so he’ll have a chance to rebound in Game 5 back in Pittsburgh.

The Smashville crowd quickly got something to cheer for as the Preds struck first in the opening period. Murray did well to block a Craig Smith deflection right in front of him, but the rebound opportunity fell perfectly for Calle Jarnkrok to score his second goal of the playoffs. Pittsburgh challenged the call for goalie interference, but Nashville was awarded a good goal.

It got (really) loud when @jarnkrok opened the scoring in Game 4. #StanleyCup pic.twitter.com/K7UmijM5aS

That first lead didn’t last long though, as the Penguins responded quickly via Sidney Crosby. Brian Dumoulin fired a pass to Crosby, who was all alone near the blue line. Crosby finished the counter with a nice backhand move to beat Rinne, and his shot bounced in off the post and Rinne’s skate. The goal was surprisingly Crosby’s first goal in a Stanley Cup Final in eight years when he scored the series winner against Detroit back in 2009.

Just under four minutes into the second period, video replay helped give the Preds the lead for good. Gaudreau picked up a shot that went wide from Ryan Ellis and seemed to have his wraparound effort impressively denied by Murray. After further review though, the puck just barely crossed the goal line, and the officials granted Nashville their second goal of the game.

That puck's across the goal line! #StanleyCup pic.twitter.com/Oevv7ZsQkW

Pittsburgh went on to have many chances to tie the game or pull back a second goal, and possibly no chance was better than another Crosby breakaway midway through the second period.

Crosby raced toward goal after receiving the puck near center ice. He saw not one, but two backhand attempts denied by Rinne, and Rinne scrambled onto his belly to somehow make a third save on a rebound attempt. The save was arguably the play of the game, and Rinne seemed like an impenetrable brick wall at that point.

Are you kidding?! #StanleyCup pic.twitter.com/oJkubcHzHi

Unable to convert on that counter, Pittsburgh fell behind by two goals after Nashville converted on one of their own. Two maximum effort passes from first-liners Mike Fisher and James Neal put the puck into Viktor Arvidsson’s path. Arvidsson corralled the puck with one hand, his left, and finished with that same hand to Murray’s glove side to put the Predators up 3-1.

Nashville went on to add an empty-netter late in the third period via Filip Forsberg, his ninth goal of the playoffs, to seal the deal. The win means the series has followed the script of each team winning their first two home games. Taking that into consideration, Pittsburgh head coach Mike Sullivan said after the game that he believes in his group as they just have to “head back home and respond the right way.”

Game 5 will be on Thursday night in Pittsburgh.

Native New Englander. Follow me on Twitter: @jonacosta_10
@jonacosta_10
Previous Can the Predators Tie it Up at Home?
Next Gator Softball Falls in Game 1 of Record Setting WCWS 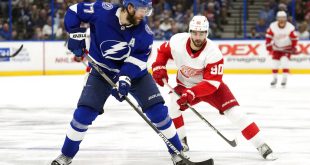