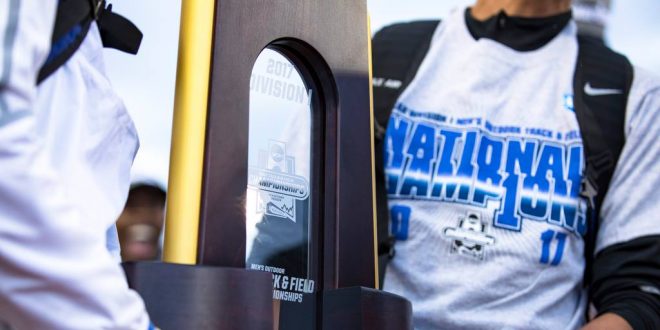 The Florida Men’s Track & Field are back to back National Champions after finishing with 61.5 points.

While the Women’s Track & Field finished in fifth place with 39 points.

Eric Futch became the eight person in Division I history to defend his 400 hurdles title. Futch finished in 48.32 seconds, a half-second personal best that had made him the No. 10-ranked 400 hurdler in collegiate history.

Grant Holloway became the first freshman in Division I history to win both the indoor 60-meter hurdles and outdoor 110-meter hurdles national titles. Head Coach Mike Holloway had a few words to say on the freshman’s titles.

KeAndre Bates, won the triple jump National title, making it his 11th sweep of the horizontal jump in Division I history. He becomes the seventh man to complete the sweep.

Mike Holloway has been with Florida for 15 seasons. Now, he is the seventh head coach in Division I history to win seven men’s NCAA Championships. He is also one of four coaches to win at least seven since 1970.

Holloway has only asked his team for three things: to fight, be selflessness and have passion. That is what has made him and his team the best.

“Anyone who had a Gator uniform on this weekend was a highlight. We didn’t have one guy that laid down and didn’t do their best. There wasn’t one person or one performance. We’re a team, we’re a family, and we got this done as a team and as a family.” -Via Floridagators.com

When asked on the keys to getting the win and what events pushed the team to the top Holloway said no big surprise besides Jhonny Victor’s seventh place finish in the high jumps.

The team will have to say their goodbye to their leader Eric Futch, TJ Holmes, Caleb Chambliss, Maurice Dix, Yanick Hart and Andres Arroyo.

Kunle Fasasi will be returning for the team after being injured this season as well as Ryan Clark who did not have any fall training.

Now for the incoming freshman, Holloway said that he could spend all day talking about them but promises that they well have some great kids coming in for the Gators.

Previous A New Dynasty in the Golden State
Next Busy Day for Gators in Pro Draft; More to Come in Final Day