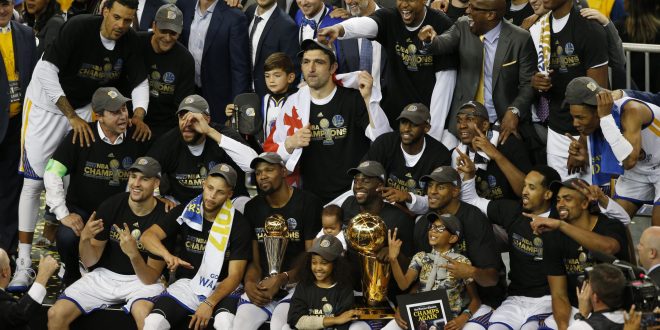 A New Dynasty in the Golden State

When looking back on dynasties of the NBA, and sports in general, the one theme that can be found is winning. The Bulls in the 90s, the Spurs in the 2000s, the Celtics and Lakers in the 80s. All teams won. In this new decade of the 2010s, a new dynasty is emerging in the Golden State Warriors.

Dynasties Start in the Front Office

The Warriors seemed to have an almost perfect season last year when they won 73 games, the most ever in the regular season. However, even with this success in the regular season they came up short in Game 7 of the NBA finals against Lebron’s Cavaliers. The front office, led by General Manager Bob Myers, made their seemingly perfect team even better. They added former MVP of the league Kevin Durant.

While many criticized Durant for the move, no one could deny the unbelievable move made by the front office for the Warriors. This seemed to fix all the issues that hindered them in the previous year’s finals. They found another great shooter next to Curry and Thompson, and more size to play defense against bigger players like Lebron.

Many saw Golden State as unbeatable heading into the 2016-2017 season, and they were.

The Warriors unsurprisingly got off to a hot start, going 16-2 before December. Curry continued his scoring superiority averaging 28 points per game during that time. Durant fit in right away with 29 points per game and more than 9 rebounds a game.

As the season continued, it became more and more clear that Golden State was exactly as dominant as originally thought and even more so.

When Kevin Durant went down with a knee in late February, many predicted a dip in the Warriors’ production. Some believed that the Warriors had come to rely too heavily on Durant’s scoring ability and would suffer in his absence. CBSSports.com wrote an article covering this. They said that while Durant was gone, they may not be able keep the one seed from the Spurs.

The Warriors went 15-5 including a 13 game winning streak before Durant came back. This resilience during a time when one of their star players, was injured shows how dominant the Warriors were.

Warriors learned in the 2015-2016 season that regular season achievements do not matter if you lose in the playoffs. The team came into the postseason looking for redemption from the year before. The Warriors swept the Trailblazers, Jazz and the Spurs while averaging 118.3 points per game and playing stout defense.

Steph Curry and the Warriors again met Lebron and the Cavaliers for the third straight year. This time, they would not allow this opportunity to slip away as they beat the Cavs in five games to move to 16-1 in the postseason and an NBA title.

Kevin Durant won the Finals MVP and had the full support of Curry as he said he was a champion.

One of the Greats?

Even though this is the first year with Durant and Curry, many foresee more championships together. The one constant for a dynasty is consistency. The core group of players  must stay together and continue their success in order to be considered a dynasty.

Durant has been very open about staying with Golden State, and he even talked about taking a pay-cut in order to do so. Steph Curry on the other hand, knows he is due much more than his current salary. He’s due for a contract that could come in around five years, $205 million, according to ESPN. This may hinder their future success as the Warriors may not be able to keep some key role players.

Many are optimistic about the continued success of the Warriors as Curry will not turn 30 until March of next year. Most of their players under contract are also still in their prime. Curry said that he believes this team is just getting started.

Many predict more winning seasons, more championships and a true dynasty in the Golden State.

@dyrudolph
Previous What’s Next For LeBron James and The Cleveland Cavaliers?
Next Gators Dominate the Track, Again 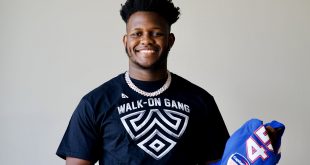