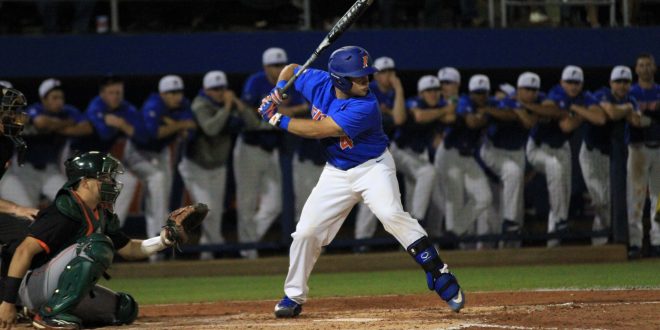 Busy Day for Gators in Pro Draft; More to Come in Final Day

The Florida Gator baseball program has an impressive track record of getting players to the MLB. In the first round, we saw junior right-hander Alex Faedo taken 18th overall by the Detroit Tigers. Yesterday, three more Gators were taken off the board.

Things got busy in the sixth and seventh rounds for the Gators. It all started when the Philadelphia Phillies selected junior shortstop Dalton Guthrie (6th round, 173rd pick). Guthrie was the epitome of reliability for Florida the past three years, making 195 career starts up to this point.

As the seventh middle-infielder taken under head coach Kevin O’Sullivan, he has always had an amazing glove. Guthrie was a two-time All-SEC defensive selection while hitting a career average of .289. He has the gloves and his bat is only going to get better.

Staying in the second round at the 192nd pick, the Cleveland Indians drafted junior catcher Mike Rivera. The Venice native always stood out behind the plate and showed flashes of a hot bat. He became the sixth catcher selected under Sully.

Rivera was hampered with a broken hamate in 2017, limiting him to two home runs and 24 runs batted in. All in all, he totaled 14 home runs with 119 runs batted in up to this point in his career.

Last but certainly not least, junior catcher Mark Kolozsvary was selected in the seventh round, 197th overall to the Cincinnati Reds. Kolo saw limited action the past three years because of the depth at catcher with Rivera and JJ Schwarz.

Though, in Rivera’s absence this year he showed a lot of potential behind the plate and in the batter’s box.

It comes as a major surprise that both River and Kolozsvary were selected before Schwarz, who has been the best bat for the Gators these past three years.

Since the Gators send players to the bigs virtually every year, Sully and the staff need to reload with talent. Yet, Florida is not the only ones eyeing the future of baseball.

Sam Carlson and Sam McMillan, a Gator commit and signee respectively, were both drafted in Day 2 of the draft. Carlson was taken in the second round by the Seattle Mariners and McMillan in the fifth by the Tigers.

There still some time for both players to decide if they will forego college and go straight to the MLB, but both players took to Twitter with their intentions.

This feeling is unbelievable. Can't wait to be a part of the @Mariners!

Thank you to everyone for the congrats. Excited to soon be a part of the Tigers organization!

Eye on the Prize

Florida looks to get their first national title in school history in the 2017 College World Series. Their first game is on Sunday night against a powerful TCU team.