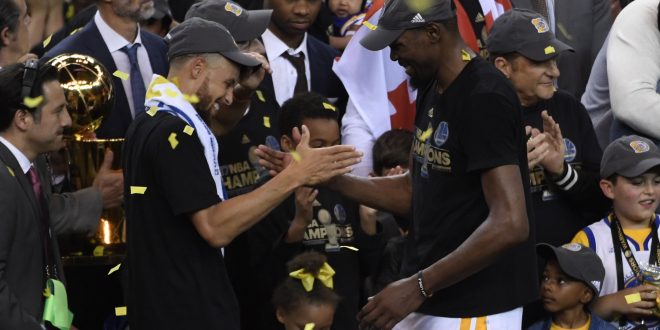 After blowing a 3-1 lead in last season’s NBA Finals the Golden State Warriors made sure not to let that happen again. The Warriors defeated the Cleveland Cavaliers 129-120 Monday to clinch the NBA Finals four games to one.

KD Finally Gets A Ring

The Warriors were led in points by Golden State’s newcomer, forward Kevin Durant. Durant had a monster game, scoring 39 points while adding seven rebounds and five assists. He was also 14-of 20 shooting.  Durant was named the NBA Finals MVP after scoring over 30 points in each game of the series.

This was Durant’s first NBA championship, as well as his first NBA Final appearance since 2012. Durant joined the Warriors this season after playing inklahoma City for eight years.

The Warriors have faced lots of criticism for being a put together “Super Team” but Durant says their teamwork and hard work is what crowned them champions.

“They call us a Super Team, but there have been a lot of Super Teams that haven’t worked. We came together and we sacrificed, and we’re champs now,” Durant said.

This was the third year of a Cavs-Warriors match up. Cleveland was led by Lebron James and Kyrie Irving. James, who played magnificently in the series, scored 41 points while Irving added 26 points.  James also had 13 rebounds and eight assists, but it was not enough to stop Golden State’s dominance.

“Not one time did I feel we were overmatched. we left everything on the floor, but it wasn’t enough. They went out and got one of the best players the league has ever seen, they did a great job on doing their recruiting over the summer time and obviously it paid dividends,” James said.

In the third quarter Cleveland outscored Golden State but still trailed by five points at the end of the quarter. However, the Warriors didn’t let Cleveland get too close, as they outscored them by four points in the fourth quarter, resulting in the final score of 129-120.