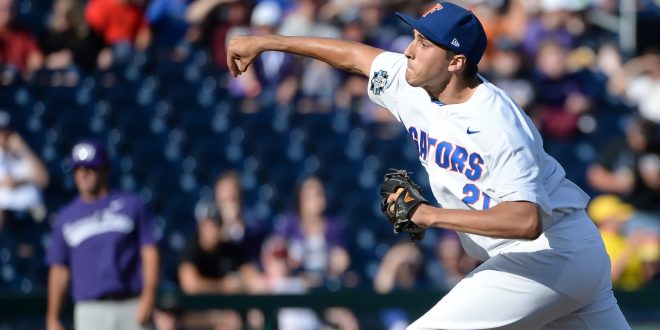 The Gator baseball team faced TCU on the opening Sunday of this year’s College World Series. Both teams looked to get off to a good start, knowing life in the winner’s bracket would be significantly easier than having to win four consecutive games to make it to the final series. Florida walked away victorious that day, and TCU faced the tough road ahead.

The Horned Frogs have navigated it though, and the two teams will face off again, this time for a spot in the championship round. TCU will have to win both Friday and Saturday, while a Florida win on either day will see them advance. The winner will take on whoever comes out of the Oregon State-LSU semifinal.

Kevin O’Sullivan’s team has gotten some timely and clutch hits so far in Omaha. Deacon Liput continued his hot streak in tournament play with a three-run dinger against Louisville, and the Gators have been able to put up just enough runs when they need them. However, they’re one win away from the finals mainly because of one word: pitching.

The Gators got a brilliant performance from ace Alex Faedo en route to a solid 3-0 win to start their stay in Omaha. TCU had trouble touching Faedo’s stuff all game long, as they only managed to put up two hits on him, while he struck them out 11 times in seven innings. Brady Singer followed that up with a gem of his own against Louisville, also going seven innings while striking out nine and allowing just one earned run as Florida won 5-1.

.@GatorsBB: 4th team since aluminum bats were introduced in 1974 to allow 1 or fewer runs through 1st 2 CWS games. 2 of previous 3 won title pic.twitter.com/nspxJATXkY

And on Friday night, they’ll trot out to the mound the third piece of their three-headed, starting-pitching monster. Sophomore Jackson Kowar will start for Florida, and he’ll be hoping to replicate the performances of his fellow pitchers. Kowar hasn’t dropped a decision this season, as he’s 12-0 with a 4.00 ERA. However, he’ll be hoping to rebound from his last performance, which came in Game 2 of the Super Regional against Wake Forest. The Deacons teed off on Kowar for 10 hits and five runs in five innings, including two homers in the first inning. Kowar doesn’t have bad numbers on the season, but it’ll be interesting to see how TCU adjusts to Kowar in a matchup that almost certainly won’t be as tough as when they faced Faedo on Sunday.

After losing to Florida, TCU knew they needed to win out if they wanted to be on the cusp of the final series, and that’s what they’ve done so far. They handled Texas A&M 4-1 to eliminate their in-state rival in the first game of the losers’ bracket. They then defeated Dick Howser Award winner Brendan McKay and his Louisville Cardinals in a 4-3 nailbiter to set up the rematch with Florida.

FROGS ON TO FRIDAY!!

TCU wins an epic battle with Louisville to setup a rematch with Florida tomorrow! #CWS pic.twitter.com/CoufjrTwmC

The Horned Frogs will also be trotting out a different pitcher on the mound Friday night from the one they pitched Sunday. Instead of Jared Janczak, off whom the Gators got nine hits, senior righty Mitchell Traver will get the start. Traver comes in with a 4-1 record and 3.79 ERA. TCU Head Coach Jim Schlossnagle said Janczak wouldn’t be available until Saturday if the Horned Frogs are able to force a second game.

In the last meeting, Faedo and Michael Byrne got the best of TCU’s All-American catcher Evan Skoug, and he’s struggled so far in Omaha. He has just one hit through three games, and just one RBI after coming in as a big source of runs for Schlossnagle’s team. Over the past two games though, others such as shortstop Ryan Merrill have stepped up. Merrill has three RBI’s over the past two games, and has at least one hit in each of his three games in Omaha. They’re going to need continued production from him, and have to hope Skoug’s bat wakes up if they want the best chance of knocking off the Gators twice in a row.

Friday at 8 p.m. on ESPN. If TCU wins, they’ll play again on Saturday, with the winner advancing to the championship series.