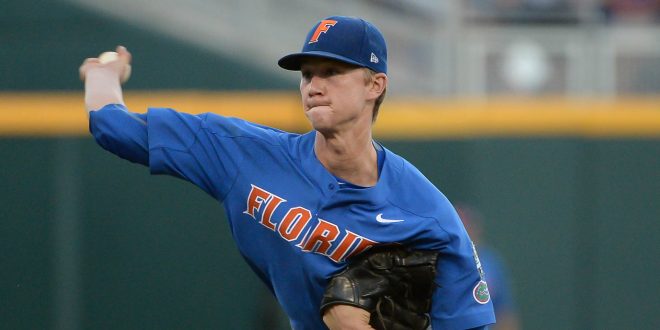 OMAHA, Neb. — A historic pitching performance from Brady Singer led to a historic night for the Gator baseball team, as Florida moved to within a game of its first-ever College World Series title.

Singer dominated yet again in Omaha, going seven full innings while giving up three earned runs and striking out 12 batters, leading the Gators to a 4-3 win in Monday night’s Game 1 against LSU. The 12 strikeouts from Singer are the most ever in a College World Series Finals game, and the most ever in a CWS game at TD Ameritrade Park.

“My feelings are that we went up against who I believe to be maybe the best pitcher I’ve seen in the SEC for an opponent since I’ve been the coach at LSU,” said LSU head coach Paul Mainieri.

For Florida, it’s their first win ever in a CWS Finals game after getting swept in their two previous attempts (2005, 2011).

The pitching staff that carried Florida to this point wasn’t going to let them down in this one. Singer led the charge to move to 2-0 in Omaha, and Michael Byrne held down the last two innings to record his 19th save of the season.

“Well, it kind of worked out the way we kind of hoped it would. Brady would go deep in the ballgame and we wouldn’t have to extend Michael Byrne, he would still be available tomorrow,” Florida head coach Kevin O’Sullivan said.

LSU’s Russell Reynolds took the loss after giving up three runs in 3.1 innings in his first start since 2015.

At the plate, Austin Langworthy and Jonathan India led the way for Florida. Langworthy went 2-for-3 with a RBI and a run, while India drove in two RBIs.

The Gators now sit in a good position to capture their first title. Since moving to the current format, teams that win Game 1 of the CWS Finals are 10-4, and six times, the Game 1 winners have gone on to sweep.

The evening started off as a pitchers’ duel. It was 0-0 after three innings, with Reynolds facing just one more than the minimum, and Singer just two more. It also included an absolute web gem from Dalton Guthrie in the third, as he hauled down a foul ball from LSU’s Kramer Robertson with a diving grab.

A man on a mission. #SCtop10 pic.twitter.com/zzsOThmsWh

The runs started to come in the fourth inning, as Florida jumped out to a three-run lead thanks to the timely hitting they’ve thrived off of in Omaha.

Reynolds walked three consecutive Gators to load the bases with one out in the inning. Freshman Austin Langworthy stepped up to the task, scoring Dalton Guthrie on a sacrifice foul out. Jonathan India then extended that lead by launching a two-RBI, ground-rule double to dead center field. For the Gators as a whole, they’ve made the most of their situations with runners in scoring position.

Florida has had a man on 3rd with less than 2 outs on 9 occasions in the 2017 CWS. All 9 men scored. #SituationalHitting

“I mean, we just play as a team together,” India said. “We have each other’s backs. And we’re doing really well in those situations… So it’s helping us out. So we’re excited for that.:

Nursing a 3-0 lead, Singer continued to rake, striking out nine batters through five innings. A big sequence for Singer came in the bottom of the fourth. He gave up back to back singles to start the inning, but fought back with three straight strikeouts to get out of the danger. The Gators had all the momentum at that point.

Until the 6th inning that is. LSU pulled a run back with a one-out, solo homer to right field from Antoine Duplantis. The Tigers then made it just a one-run game later in the inning thanks to a Beau Jordan RBI-single to left that scored Zach Watson.

Gators Hold on Down the Stretch

Florida answered right back though in the top of the 7th.  Mike Rivera delivered another timely hit with a RBI single up the middle to score Langworthy. The RBI marked Rivera’s fourth RBI of the College World Series on just his third hit in Omaha, and gave the Gators a 4-2 lead.

Singer tossed a scoreless bottom of the seventh, but was pulled after giving up a leadoff double to Greg Deichmann in the bottom of the eighth. O’Sullivan brought on Michael Byrne, who looked to earn yet another save. He gave up a run on a RBI single from Watson, but Nick Horvath, a defensive substitution in center field, made one of the plays of the game. Watson tried to leg out a double on the play, and Horvath fired a cannon to second base to throw him out, keeping the potential game-tying run out of scoring position.

“That changed the whole complexion of the ballgame, to be honest with you,” O’Sullivan said. “Now they’ve got a runner at second. They’re down a run with one out, and all the momentum is in their favor.”

“And a play like that can just change the whole complexion of a ballgame. I think that was really big.”

Then in the ninth, Byrne did what he’s done all season. He retired the three Tiger batters he faced, earning his 19th save of the season, extending his NCAA lead and his school record, and gave the Gators the leg up in this best-of-three series.

Omaha was all #GoGators tonight! pic.twitter.com/XU2O8990MB

“You know, we’re close but we haven’t finished,” O’Sullivan said. “We haven’t crossed the line yet.”

Native New Englander. Follow me on Twitter: @jonacosta_10
@jonacosta_10
Previous Gators Baseball Rallies Around Cup and Past LSU
Next A Look Back at the First Ever NBA Awards