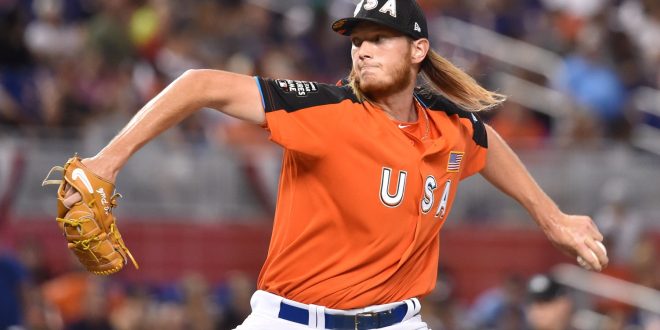 Before the current all-stars hit the field in Miami for the 2017 MLB All-Star Game, baseball fans got to see the leagues most coveted prospects in the 2017 MLB Futures Game.

On Sunday afternoon, Team U.S.A put on an offensive clinic early and were able to hold on to the lead late as they defeated Team World 7-6 at Marlins Park. Tampa Bay Rays top pitching prospect Brent Honeywell was dominant on the mound to begin the ballgame as he threw two shutout innings while also striking out four of the seven batters he faced, earning himself Futures Game MVP Honors.

Won’t Go Down Without a Fight

Even though Team World found themselves in an early 7-0 deficit, they would continue fighting. Five different players on Team World had an RBI. Most Notably, Mets prospect Tomas Nido. The 23-year-old out of Puerto Rico went 2 for 2 with two walks and two RBI’s. Team World was down three runs in the ninth but came up just short scoring only two runs in the final frame.

The Future is Bright

While the Houston Astros are already enjoying success due to their young duo of Carlos Correa and Jose Altuve, they have another weapon coming down the pipeline in Derek Fisher. Fisher, a 2014 1st round draft pick, was impressive Sunday as he was one of the biggest contributors in Team U.S.A’s victory. The 23-year-old went 1 for 2 with two RBI’s, a walk and a run scored. Brian Anderson, the 24-year-old prospect for the Miami Marlins, also had a successful afternoon with the bat as he went 2 for 4 with a run scored.

Gators Close it Out

Former Florida Gators pitcher A.J. Puk was also featured in Sunday’s showcase as he sealed the victory the United States. It did not come easy, however, as Team World was able to score two runs off the Athletics prospect. The 6th overall pick in the 2016 MLB draft gave up two hits and a walk before he forced a ground out to end the ballgame.

Congratulations to @AJ_Puk11 on being selected to represent the U.S. team in the MLB All-Star Futures Game. pic.twitter.com/HBvLV0dCzw