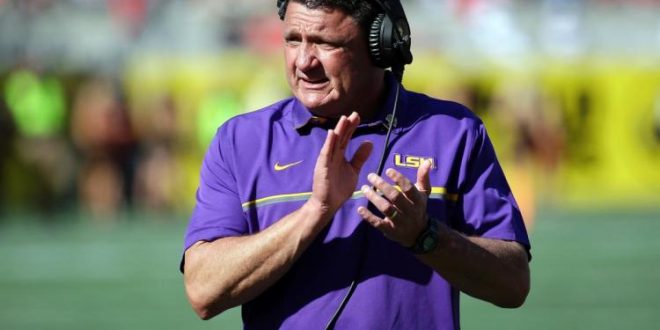 LSU Coach Ed Orgeron was one of three coaches who took the podium today at SEC Media Days.

College football season is officially among us. The SEC kicked off Media Days today in Hoover, Alabama with Arkansas, LSU, and Tennessee. Miss the action? That’s okay. WRUF has today’s highlights.

Bielema was the first coach to speak. But, his answers were not easily forgettable. The first topic of the night was former South Carolina running back David Williams. Williams came to Arkansas as a graduate transfer. However, Bielema says Williams is already “a big hit on campus”.  Then, Bielema addressed the tail end of Arkansas’ 2016 season. In the end, the Razorbacks had a 7-6 season. But, they dropped their last two games after leading both early on. Bielema did not diss his team, though. Instead, he just said, “We’re going to concentrate more on what we need to do in the second half of games to win”. Secondarily, Bielema said he was “excited to grow the Missouri rivalry.”

Next, Ed Orgeron took the podium. Orgeron was there to talk about LSU. However, he brought up Alabama more than anything. In his opinion, the way to beat Alabama is “to recruit on their level.” Then, he acknowledged that he “must beat Alabama” and that there was “a difference between the two programs.” The Tigers have lost their last six meetings against the Tide. But, it seems like Orgeron’s top priority is not making it seven. Putting Alabama aside, Orgeron did talk about his own team. Firstly, it doesn’t look like edge rusher Arden Key will be healed in time for Fall camp. Also, there is still a QB race, but it looks like Danny Etling will start for the Tigers.

Last year, big names accompanied Tennessee at Media Days. This year, seniors without the college football celebrity accompany Jones. But, Orgeron noted the “leadership of [the] three players.” Tennessee almost won the SEC East in 2016, but ultimately gave it up to Florida. (Although, Tennessee was victorious in their match-up against Florida). Jones was quick to bring up the fact that he is “going into his fifth year as head coach.” Jones clearly sees this as an advantage over newer coaches in the SEC. Unsurprisingly, he is “unsure” of the quarterback status.

Media Days resumes tomorrow. Coach Jim McElwain will bring Duke Dawson, Marcell Harris, and Martez Ivey to the stage to represent Florida. In addition, Georgia, Vanderbilt, and Mississippi will be in attendance.