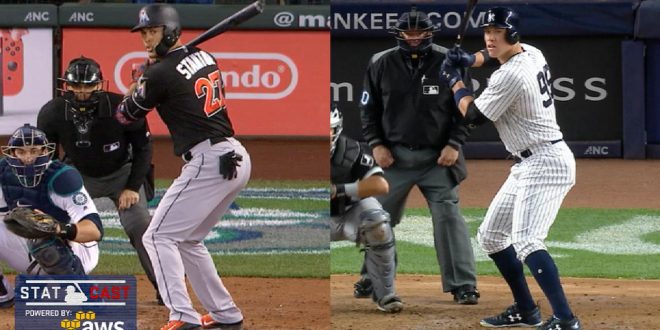 Some of baseball’s elite sluggers will get to do what they do best tonight at the annual Home Run Derby. Eight batters will take the field at Marlins Park and hit as many homers as they can in four minutes. Each batter picks his pitcher and can get bonus time depending on the length of his runs. Let’s take a look at tonight’s odds as well as what to expect.

Can Giancarlo Stanton Defend His Title..

The number one seed in the Derby is none other than a Hometown Hero. This season, Miami’s Giancarlo Stanton already slugged 26 homers. He also holds the season title of started Designated Hitter.

It’s official!@Giancarlo818 has been named the National League's starting Designated Hitter for the 2017 @MLB #ASG! pic.twitter.com/l5Qb9RvH7P

At last year’s Derby, Stanton batted a record 61 home runs to win the title. Tonight, he looks to defend it and has a +165 chance of doing so. He faces New York Yankees hitter and number 8 seed Gary Stanton in the first round. If Stanton wins tonight, he will be the third person to win back-to-back Derbies.

.. Or Will Aaron Judge Upset the Home Run Derby?

The number two seed in the Home Run Derby is Aaron Judge and fans should not count him out. Judge is expected to meet Stanton in tonight’s Final, but he actually has a chance to overtake him. The Yankees rookie posted the most homers in the majors this season (30) and only trails Stanton’s odds by 10. But, even if Judge doesn’t make it to the Final, he is sure to face at least one Marlin. Judge’s first round match-up is number  7 seed Justin Bour from Miami. In addition to the Home Run Derby, Judge is expected to win Rookie of the Year and possibly AL MVP.

Although there are clear favorites tonight, other players will be in attendance. In order, the list is Stanton, Judge, Cody Bellinger, Mike Moustakas, Miguel Sano, Charlie Blackmon, Justin Bour, and Gary Sanchez. The action begins tonight at 8 on ESPN.