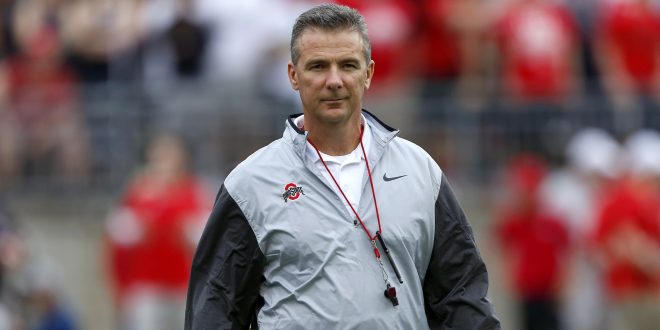 Ohio State football head coach Urban Meyer joined Sportscene with Steve Russell yesterday afternoon. Meyer discussed his views on the Buckeyes this upcoming season, his relationship with his new assistant coach and even mentions some difficulty he’s encountered with the NFL Draft.

After a devastating loss to Clemson last season in the Fiesta Bowl, Meyer believes he has a stand out squad for the upcoming season.

“Best group of upperclassmen we’ve had in a while,” Meyer said when asked about his experienced players. The amount of confidence that Meyer has with his team is recognizable from the beginning of the interview.

On the offensive side, he’s been enjoying his new assistant coach and offensive coordinator Kevin Wilson. Wilson was previously Indiana’s head coach for five years. Wilson has more than 25 years of coaching experience under his belt.

On the defensive side, the Buckeyes have defensive coordinator Greg Schiano, former head coach of the Tampa Bay Buccaneers. Schiano has been a better coach than Meyer had expected him to be. The Buckeyes defense have been ranked as one of the top-tier defenses in the nation in the two years he’s been there.

“The defensive line has at least five players going in the first round of the (NFL) draft this year,” Meyer said.

This isn’t the first time Meyer has had to dealt previous head coaches joining as new coordinators.

“First time I had (head coaches as coordinators) I was skeptical at first, but it worked out fine in Florida and it’s been great so far (in Ohio).” Meyer said.

The only concern for Meyer is his secondary for this upcoming season. Three of his starting safeties are heading to the draft and three had also left the year before. He’s relying on Senior Erick Smith to take the reigns of the secondary squad and have freshman Jordan Fuller step up and fill in as a prominent role in the defense.

You can hear the interview right here.

Recent grad from the University of Florida. Editing all articles on here while helping out the newbies. Love all things basketball.
@@MarcoJMartinez_
Previous SEC Media Makes Their Picks
Next Tampa Bay Rays Look To Keep Second Seed in AL Wild Card