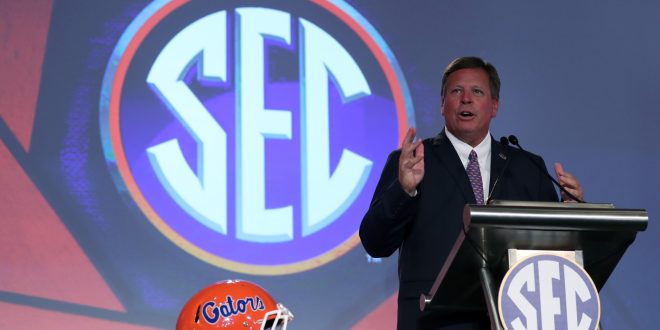 College football can’t come soon enough. Practice will commence in a few weeks for the Florida Gators and all the other school in the nation. Then, the end of August comes around and everyone can enjoy their game days.

For now, we have to settle for talk and expert picks. With the conclusion of SEC Media Days, the media has voted on who will win the conference and each division as well as the all-conference teams.

Is ‘Bama expected to be dethroned?

The answer is no. The SEC media has predicted that the Crimson Tide will win their fourth straight conference title. As for the Gators, they are picked to finish second in the East division behind the, you guessed it, Georgia Bulldogs.

This comes as no surprise. The Crimson Tide are returning the 2016 SEC Offensive Player of the Year, Jalen Hurts. All the four and five-star recruits who have sat on the bench the past few years will finally get the chance to play. That’s why no one expects the Tide to stop rolling.

To the dismay of Gator fans, the Bulldogs were picked to win the East. The ‘Dawgs haven’t beaten the orange and blue since 2013 but that doesn’t stop the media from thinking highly of them. They are returning a rising star at quarterback in Jacob Eason. Nick Chubb and Sony Michel are arguably the best running back duo in the country. And year two for Kirby Smart could mean a better implementation of his stout defensive scheme.

A lot of questions surround Florida’s quarterback situation. Will Jim McElwain go with the explosive grad transfer Malik Zaire or Feleipe Franks who has been learning the scheme since last year? The offense has weapons in Jordan Scarlett, Antonio Callaway, Tyrie Cleveland, and plenty of others. The offensive line will be improved under fiery offensive line coach Brad Davis. And the defense is always solid at Florida.

McElwain has yet to name a starting quarterback before the regular season starts. Will this be the year? It just might be because the first game of the season against Michigan is no cake walk.