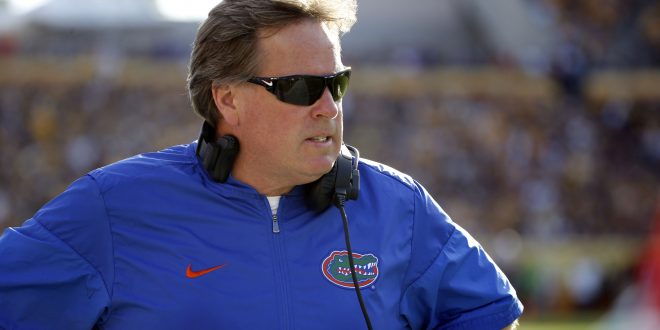 The Florida Gator football team opens fall camp with a Thursday afternoon practice after hosting Media Day on Wednesday. The biggest question mark heading into the 2017 season is once again at the quarterback position.

Florida coach Jim McElwain stated the battle for the starting quarterback position is even. Graduate transfer Malik Zaire, redshirt freshman Felipe Franks and 2016 starter Luke Del Rio all look to be in contention for the job.

Franks was atop the Gator depth chart and ahead of Kyle Trask at the conclusion of spring, but that was prior to the addition of Zaire. Del Rio also missed all of spring camp due to injury. Franks says the high level of competition in the quarterback battle brings out the best in him. He added that bringing in Zaire has pushed him to do “that extra little bit” of work with receivers and the offensive line.

Zaire echoed Franks comments about the positive outcomes of a healthy QB competition. He says competition is nothing new to him and he wants to do whatever he can to help the team win. Zaire added that he and every quarterback on the team wants to start, but the group sticks together and is focused on the mission of winning a national championship.

Del Rio is coming off two offseason shoulder surgeries. He opened the 2016 season as the starter and went 5-1 in six games last season.

The difference is in the details. Phase 6 starts now. #GoGators pic.twitter.com/PBJM6bsDS9

Analyst Phil Steele believes Florida has the potential to be the most surprising team of the year. He thinks a “usual, good defense” and improved offensive units give the Gators a great chance to advance to the SEC Championship for a third consecutive season. He predicts the Gator defense will finish in the top-10 in total defense. Steele also ranks the Gator secondary and defensive line as top-10 units.

Steele also emphasized the Gator schedule as a big reason for potential success. Florida plays only three true road games all season against Kentucky, Missouri and South Carolina. At the end of the season, Steele thinks the Gators will find themselves winning double-digit games and taking home another SEC East title.

The Gators open their regular season schedule on September 2 against the Michigan Wolverines in Dallas.