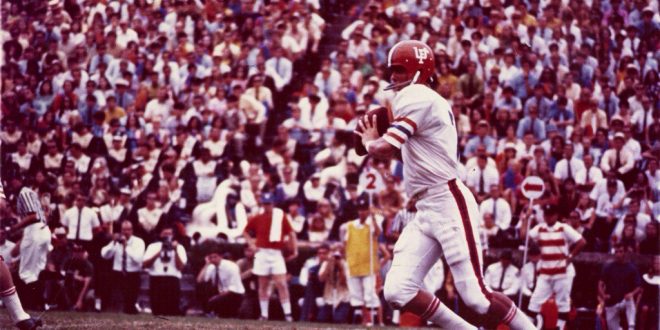 As a quarterback for the Florida Gators, John Reaves was NCAA's all-time leading passer (courtesy of Orlando Sentinel)

Former Gator star and NFL quarterback, John Reaves, has died at the age of 67.

According to reports, his son discovered him Tuesday afternoon and called 9-1-1. The cause of death is undetermined but is still under investigation, an officer reports. Former Gator coach Steve Spurrier, appearing on Sportscene with Steve Russell today, said Reaves, who coached under Spurrier at Florida and played for Spurrier in the USFL says the loss of Reaves will be felt by all of Gator Nation.

“He will be missed. We are gonna mourn some. But I think we got to remember what a wonderful guy John was and all his accomplishments,” Spurrier said.

John Reaves’ and the “Super Sophs”

In his first game at Florida, Reaves threw for a school-record 342 yards and five touchdowns in 1969 as Florida upset nationally ranked Houston at home.  Not only was that an incredible accomplishment by itself, his stats from his first game broke the mark of the 1966 Heisman Trophy winner, Steve Spurrier. Reaves left Florida after the 1971 season as the NCAA’s all-time leading passer– throwing for 7,581 yards and an SEC-record of 54 touchdowns.

However, Reaves’ most memorable moment was at the 1971 season finale against the University of Miami– a game that would be remembered as the “Florida Flop.” Late in the fourth quarter, the Gators were leading 45-8, Florida defenders laid down and let the Hurricanes score a touchdown so Reaves could try to break the record. He got the ball back and got the 15 yards he needed to break Jim Plunkett’s NCAA passing record.

From a College Star to a NFL Legend

After an incredible college career, Reaves began his NFL journey as a first-round pick of the Philadelphia Eagles in 1972. From there, he played for the Cincinnati Bengals from 1975-1978, the Minnestoa Vikings for two seasons (1979-1980), the Houston Oilers for one year (1981), and then the Tampa Bay Bandits (1983-1985). He also played for the Buccaneers during the NFL strike in 1987.

However, it was not all glamorous for the star quarterback. Reaves struggled with drug and alcohol related issues. Back in 1980, the Vikings put him in the Hazelton Clinic where he then dedicated the next two decades to sobriety.

While dealing with personal issues, Reaves became the number two all-time passing leader in the USFL. In the Sportscene interview, Spurrier said Reaves was a very good quarterback.

“John was sensational. He threw for 4000 yards in ’84… he was as good of a drop-back passer as I ever coached,” Spurrier said.

Transitioning from the Field to the Sidelines

After his playing days ended, Reaves coached under Spurrier as the tight ends coach (1990-1994) and then coaches at South Carolina (1995-1997).  After coaching, Reaves went into private business.  But he will long be remembered as one of the best quarterbacks to ever play for the University of Florida.