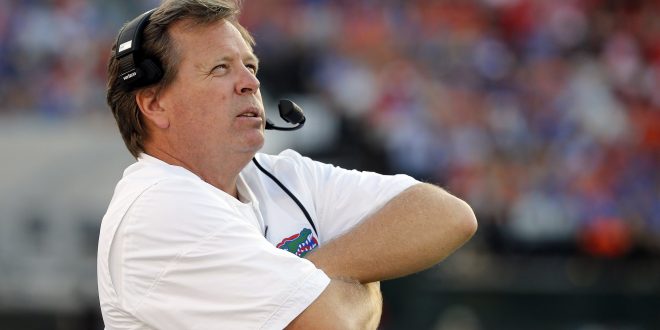 Florida Football Head Coach Jim McElwain addressed the suspensions of seven players from his team during a press conference today.

Coach McElwain was quick to say how disappointed he was in the decision making from the seven players, especially with star wide receiver Antonio Callaway.

Callaway’s Off the Field Issues

It has already been a dicey off-season for Callaway after a misdemeanor for possession of marijuana. There was a possibility Callaway was going to be suspended for that offense. During the Florida Media Day though, McElwain said he did not anticipate any of his players being held out of the Michigan game.

WATCH: Only twelve days ago Coach McElwain said that he didn't anticipate on anyone sitting out against Michigan. Fast forward to today… pic.twitter.com/xSv6OLCIkw

Twelve days later and here we are.

Of the seven players suspended, four of them are freshman

These suspensions will handicap the development for these four freshmen. They will now miss the majority of fall camp and the preparations going into a game day.

The other two suspensions are junior defensive end Keivonnis Davis and redshirt sophomore defensive tackle Richerd Desir-Jones. This will hit the defensive linemen rotational depth the most, as neither are starters.

Coach McElwain did not outright confirm the rumors that all seven were suspended for misusing charge card funds, but in an answer to a question about paying back the money that was effectively taken, Coach McElwain said that paying back for what they took is part of the process.

Taking away something that matters to the players is what McElwain believes is the proper punishment, which for them is the game of football.

Most noteworthy though is that all of the suspended players will miss all team activities from now until the day after the Michigan game.

Originally from Ocala, Florida. University of Florida Class of 2017. Avid FIFA player willing to beat anybody. Follow me on Twitter for everything you need to know!
@JoshLaSelva
Previous 7 Gators Suspended For Season Opener, Including Antonio Callaway
Next Rays’ Blake Snell Pitches Gem in 3-0 Win Over Seattle